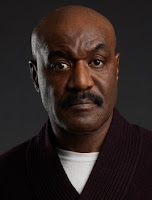 The Agents of S.H.I.E.L.D. spinoff Marvel's Most Wanted (is that whole thing the actual title, or can we leave off the "Marvel's" like we do with AOS and just call this thing Most Wanted?) has added another cast member... a Marvel character fairly beloved by a loyal cult of comics fans. Joining S.H.I.E.L.D. stars Adrianne Palicki (as agent Bobbi Morse, aka Mockingbird) and Nick Blood (as agent Lance Hunter), Deadline reports that Delroy Lindo (Broken Arrow, Get Shorty) will play Dominic Fortune, a character created by Howard Chaykin in the Seventies (based on his previous Atlas Comics character the Scorpion). Chaykin's Fortune was a Jewish freelance costumed adventurer (or "brigand for hire"), seeking thrills and, er, fortune, in the 1930s. His adventures appeared (often as backups) in various Marvel comics in the late Seventies and early Eighties. An elderly version of the character also popped up in various contemporary Marvel titles, interacting with the likes of Spider-man and Iron Man. In 2006 he was re-introduced to the Marvel Universe miraculously de-aged in modern times in Sable and Fortune, the first three issues of which were drawn but legendary Modesty Blaise and James Bond artist John M. Burns. (Sadly that book suffered the fate of all Burns books, meaning the issues trickled out late, the artist was changed, and the series was ultimately truncated.) It was the de-aged Fortune (now sporting a mustache) who encountered Mockingbird in the comics, appearing in the series Hawkeye and Mockingbird (which seems to serve as some sort of template for Marvel's Most Wanted, albeit with Lance Hunter as Bobbi's paramour instead of Clint Barton, who's tied up in Avengers movies in the person of Jeremy Renner, who seems quite unlikely to turn up in a TV series).

More recently, however, the Fortune of the comics has aged again overnight (it all has to do with serums and formulas, as you would expect from Marvel), and the elderly Fortune showed up in an especially fun recent issue of S.H.I.E.L.D. drawn by Chaykin (issue 11), teamed up with TV's Phil Coulson. At 63, Lindo is neither old enough to play this version of the character, nor young enough to play the adventurer of the original 1930s-set comics, so presumably they're doing something different with the TV Fortune. (Will he be a Nick Fury surrogate?) Chaykin seems to approve of the casting with one caveat, which he posted in the comments on Deadline's story: "Just as long as he’s still Jewish." Personally, I was really hoping to see the young, vital Dominic Fortune appear on Agent Carter, where his incessant womanizing would have surely rubbed Peggy the wrong way. But perhaps he's too similar to the Howard Stark character played by Dominic Cooper.
Posted by Tanner at 12:50 AM