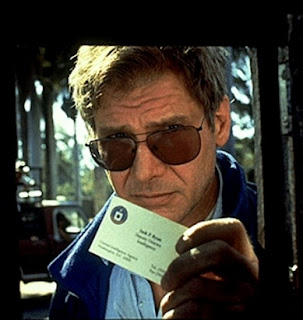 Quite a cast has come together for the fact-based ensemble spy drama Official Secrets, about GCHQ whistleblower Katherine Gun. Deadline reports that former Jack Ryan Harrison Ford (Patriot Games, Clear and Present Danger) will again play a CIA agent; Paul Bettany (A Beautiful Mind) and Martin Freeman (Sherlock) will play journalists; Anthony Hopkins (Mission: Impossible 2, The Looking Glas War) will play a retired British General, and Natalie Dormer (Elementary) will star as Gun, a linguist working for GCHQ (the UK's equivalent of the NSA). Directed by Justin Chadwick (Mandela: Long Walk to Freedom), a veteran of the hit UK TV show Spooks (known to Americans as MI-5), Official Secrets is based on the 2008 book The Spy Who Tried to Stop a War: Katharine Gun and the Secret Plot to Sanction the Iraq Invasion by Marcia and Thomas Mitchell. The title pretty much says it all, but Gun (who actually does kind of resemble Game of Thrones star Dormer) leaked an email to The Observer exposing an illegal U.S./UK intelligence operation designed to influence U.N. approval of the 2003 invasion of Iraq.

The intersection of espionage and journalism (explored to perfection in the 2003 miniseries State of Play) should be extremely fertile ground for contemporary films, though we've seen some misfires like The Fifth Estate (about Julian Assange) and ultimately, despite a thrilling first hour, Shoot the Messenger (about Gary Webb, who first reported on the CIA's involvement in L.A.'s crack epidemic). Let's hope that Chadwick manages to combine spies and conspiracy with the journalistic thrills of Oscar contender Spotlight. He's certainly got an impressive cast to work with!

There is no distributor yet, but according to the trade, "The Solution Entertainment Group’s Lisa Wilson and Myles Nestel are executive producing the feature film and handling financing and international sales beginning next month at EFM."
Posted by Tanner at 9:55 PM