See the First Mission: Impossible On the Big Screen in L.A. 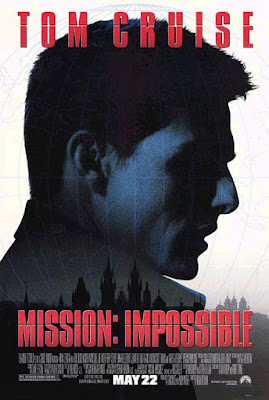 James Bond movies play the revival circuit all the time, but the opportunity to see early entries in other continuing blockbuster spy franchises in the theater is much less frequent. Los Angelenos, however, will get just such an opportunity next week when the Arclight Hollywood presents the first Mission: Impossible on the big screen. No, I'm not talking about Mission: Impossible vs. The Mob, the film assembled from two episodes of the TV show to play overseas in the Sixties (though that would certainly be cool to see in a cinema!); I'm talking about the first Tom Cruise movie, which will be celebrating its 20th anniversary--almost to the night. Brian DePalma's Mission: Impossible opened on May 22, 1996; the Arclight screening (presented digitally) happens just a day late on May 23, 2016 at 7:30pm. Tickets are available from the Arclight website. It's kind of amazing that Cruise has been playing the role of IMF agent Ethan Hunt for so long. No actor ever played James Bond continuously for so many years (though Connery returned to the role for Never Say Never Again 21 years after his first outing as 007), though the Mission: Impossible movies have never appeared with the regularity of Bonds, making that feat somewhat easier to, er... accomplish.

When I first saw Mission: Impossible in high school, I came home very disappointed by what screenwriters William Goldman and David Koepp had done to Jim Phelps, beloved hero of the TV show (played there by the great Peter Graves and in the movie by Jon Voight), who I knew at that time only through the late 80s/early 90s revival. But over the years, I've learned to let go a little. Plus, the high quality of the recent entries in the film series has earned some good will on my part toward the first one. While the Phelps twist will never sit right with me, I can now appreciate DePalma's film for the many things it does right. He directs an honest-to-goodness spy movie, homaging the genre far outside of just the Mission TV show or the Bond movies at a time when many believed it to be dead after the fall of the Berlin Wall. His canted angles of twisty European streets recollect Carol Reed, Sidney Furie and Martin Ritt with the same gusto that his expertly constructed setpieces tribute, as always, with DePalma, Alfred Hitchcock. (Though of course the film's most memorable moment, with Cruise dangling from the ceiling of the CIA, actually comes directly from Jules Dassin's Topkapi.) And Danny Elfman's score is utterly fantastic from start to finish, like DePalma taking its musical cues as much from Hitchcock collaborators like Bernard Herrman as from original Mission: Impossible composer Lalo Schifrin. For open-minded spy fans, I think seeing the 1996 Mission: Impossible on the big screen again could prove revelatory.
Thanks to Neil for the heads-up!
Posted by Tanner at 11:27 PM