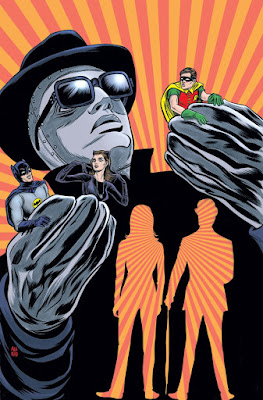 DC Comics' Batman '66 Meets Steed and Mrs. Peel, uniting the Adam West incarnation of the Caped Crusader with the original Avengers, was first announced at Comic-Con last summer. But after that news on the project was frustratingly scarce. In the fall came the surprising news that Batman would next team up with another pair of Sixties tube spooks, Napoleon Solo and Illya Kuryakin in Batman '66 Meets The Man From U.N.C.L.E. Again, details were scarce, and spy fans were left to ponder whether the U.N.C.L.E. series had precluded the previously announced Avengers crossover, or merely preceded it. Thankfully it now seems clear that DC is intent on a series of Sixties Batman TV crossovers, the issues of which appear to have replaced the ongoing monthly Batman '66 comic, which came to a close just before the U.N.C.L.E. crossover began. The publisher officially announced Batman '66 Meets Steed and Mrs. Peel last month (as reported on Comic Book Resources), with the first issue hitting comic shops July 6 (after debuting digitally on June 8) and the second slated for August 3.

The 6-issue series will be a co-publication with BOOM! Studios, who have held the license to publish Steed and Mrs. Peel comics since 2012, and have done so intermittently since then, along with reprinting Grant Morrison's early Nineties run on the title. BOOM!'s most recent stab at Steed and Emma (for my money, bar none the greatest characters in all spy television) came in 2014 with "Mrs. Peel, We're Needed" by Ian Edginton and Marco Cosentino. That series was originally solicited as being six issues, but was alarmingly truncated to just three (and never collected in trade), presumably owing to poor sales. (A pity, too, because Edginton delivered a great story chock-full of amusing references to The Prisoner, James Bond and other Sixties pop culture spies.) Hopefully a meeting with Batman will give The Avengers the higher profile they need to sell more comics of their own, and Boom! will at least allow Edginton to finish out his 6-issue run and then publish a collected edition to match their previous three volumes of original comics. That seems like a possibility because, happily, Edginton is the writer on Batman '66 Meets Steed and Mrs. Peel! Matthew Dow Smith (whose previous TV-based comics include Doctor Who and The X-Files, and who also drew the very first solo adventure of Mike Mignola's Lobster Johnson) provides the art, and the great Mike Allred (Red Rocket 7) continues his cover duties from Batman '66 and Batman '66 Meets The Man From U.N.C.L.E. (Additionally, Cat Staggs will provide a variant cover for the first issue.) 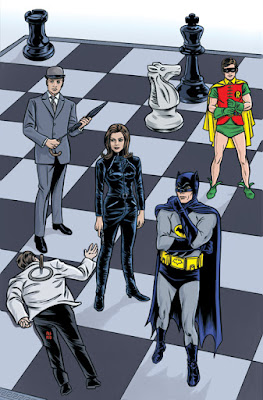 Some fans complained about the artwork because the publisher apparently didn't obtain likeness rights for Robert Vaughn and David McCallum, but I thought DC really knocked it out of the park with Batman '66 Meets The Man From U.N.C.L.E., which will be collected in hardcover in September. I sincerely hope that Batman Meets Steed and Mrs. Peel maintains that high level of quality and fun, and with Edginton (who also penned a quartet of outstanding Sherlock Holmes graphic novel adaptations) at the helm, I'm confident that it will. Furthermore, if I may dare to dream a moment, I hope that the two miniseries are successful enough to warrant follow-ups. I would love to see more U.N.C.L.E. from DC (and I suspect the only way that will happen is with Batman along for the ride), and I would love even more to see some sort of jam-packed hullabaloo with Batman, Steed, Emma, Napoleon and Illya all together! (While I'm dreaming big, such an epic event should definitely be drawn by Allred. He loves hullabaloos.) At the very least, it will be nice to have a pair of Batman '66 superspy crossovers next to each other on my bookshelf by early next year. (The hardcover volumes DC has done with Batman '66 are very attractive indeed.)

I have no doubt that this series will yield an umbrella fight between John Steed and the Penguin, and a catsuited cat fight between Emma Peel and Catwoman. And obviously (judging from the cover for #2), Cybernaughts show up too. And I wouldn't be at all surprised to see the Hellfire Club make an appearance. But here's what we know for sure, in the form of DC's solicitation copy for the first two issues.


BATMAN ’66 MEETS STEED AND MRS. PEEL #1England swings and so does the Dynamic Duo in this historic pairing of two of the hippest shows from 1960s television. DC Comics and BOOM! Studios join forces to bring these iconic characters together for the first time!
As Bruce Wayne shows the beautiful head of a UK electronics company the sights of Gotham, they are interrupted by the felonious feline Catwoman! Unwilling to leave Miss Michaela Gough unprotected, Bruce resigns himself to the fact that Batman cannot save the day. But some new players have arrived in town—though even as the lovely, catsuit-clad Mrs. Peel and her comrade John Steed take control of the situation, nefarious plots continue apace!

BATMAN ’66 MEETS STEED AND MRS. PEEL #2Gotham City’s police headquarters have been besieged by mysterious metal men, and our heroes are put in an unlikely position: as Catwoman’s saviors. And when even Batman’s best efforts falter, John Steed’s trusty umbrella plays a key role in the rescue! Co-published with BOOM! Studios.

Like Batman '66 Meets The Man From U.N.C.L.E., Batman '66 Meets Steed and Mrs. Peel will be a digital first comic. This means that the comic will be published digitally on a bi-weekly schedule in advance of its print publication. Each digital issue contains half the contents of each print issue, so digitally it will amount to twelve parts total.