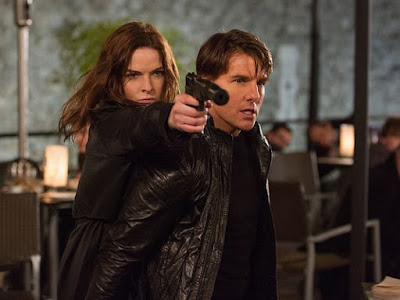 Paramount revealed new details about Mission: Impossible 6 today at Cinemacon, and CinemaBlend was there to report on it. Regular IMF team members Simon Pegg and Ving Rhames will return along with the previously announced Tom Cruise and Rebecca Ferguson, the latter making her second franchise appearance and thus becoming the first female agent to recur in the film series. Additionally, Alec Baldwin will become the first director of the IMF to appear in two films, the position having seen more than its share of turnover throughout the years. And Sean Harris, who played Solomon Lane, head of the Syndicate (the organization a nice throwback to the TV series, first teased at the end of Mission: Impossible - Ghost Protocol in 2011) will be the series' first villain to make a reappearance. But Jeremy Renner, who has appeared in the last two movies in the franchise as IMF agent William Brandt, will not be back for this outing. This is probably due to his numerous other commitments - most notably the two back-to-back Avengers movies on his plate. Last week, Variety revealed a few more details about the role to be played by franchise newcomer Henry Cavill (The Man From U.N.C.L.E.), and it sounded a lot like Renner's role in Mission: Impossible - Rogue Nation. According to the trade, "Cavill would play some sort of a right hand to the head of Cruise’s unit." Presumably that means Baldwin. So it sounds to me like returning director and screenwriter Christopher McQuarrie wrote the part for Renner, but changed the role when the actor proved unavailable. (Team members coming and going is a longstanding tradition in the Mission: Impossible franchise, going back to the days of the TV show.) While Renner it's always possible Renner could still show up in a cameo (like Rhames did in Ghost Protocol), I kind of hope they don't try to address his absence in some unsatisfying way, like saying he was killed off-screen. I'd rather it just go unexplained, like Martin Landau's and Barbara Bain's disappearances from the fourth season of the show.

Some new faces joining the cast for the sixth film will be the previously reported Vanessa Kirby, and British actress Sian Brooks, whose villainess proved the standout character on the most recent season of Sherlock.

It was also announced at Cinemacon that the new movie's shooting locations will include London, Paris, India and New Zealand, and that production commences on April 16. Furthermore, Mission: Impossible 6 will be the first entry in this or any major spy franchise to shoot in 3D. (It's sort of surprising it took this long, since Paramount loves that format.) I could care less about 3D, personally, and would fear it might detract from the series' signature action setpieces, except for the news that it's shooting in IMAX 3D. This is indeed preferable. The sequences shot for the large format in Brad Bird's Ghost Protocol were truly spectacular, and for me 3D works better on the giant screen. (Provided you're sitting in the right spot, that is.)

What sort of death-defying stunts are we likely to see Tom Cruise performing in 3D? Well, producer David Ellison offered some tantalizing teases about that to Collider last week (via Dark Horizons):


"And I will say after the Burj [Khalifa] we thought it was going to be impossible to top that stunt, and then Tom did the A400M for the plane. What Tom is doing in this movie I believe will top anything that’s come before. It is absolutely unbelievable—he’s been training for a year. It is going to be, I believe, the most impressive and unbelievable thing that Tom Cruise has done in a movie, and he has been working on it since right after Rogue Nation came out. It’s gonna be mind-blowing."

So we've got that sequence to look forward to... whatever it turns out to be!

The Mission movies have been on a roll lately, with the last two being easily the best in the two decade old film series. I have every expectation that McQuarrie will deliver once again, and I can't wait to see how!
Posted by Tanner at 12:29 AM