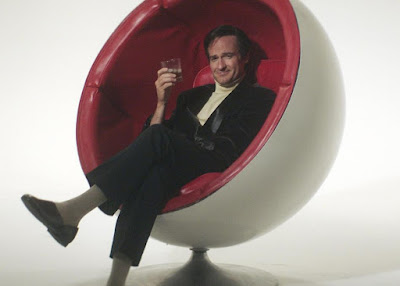 For the past year or so we've heard little about that George Lazenby documentary that was rumored to be in the works. But today it careened onto the internet in a spectacular way, with a fantastic trailer and the announcement that it will premiere at the South by Southwest Film Festival next week. And the trailer reveals that it's actually quite a bit more than a traditional documentary. It's a "documentary-narrative hybrid," which combines interview material with Lazenby today with recreations of the larger than life tales he narrates. The recreation cast includes Josh Lawson (House of Lies) as Lazenby, Jeff Garlin (Curb Your Enthusiasm) as Harry Saltzman, and Dana Carvey (Saturday Night Live) as Johnny Carson. Jane Seymour (Live and Let Die) and Jake Johnson (Drinking Buddies, Jurassic World) also star, the latter playing a presumably made-up or composite character with an inside joke name that may tickle hardcore Ian Fleming fans: Peregrine Carruthers.

Lazenby is an incredible raconteur, and the tale of how he basically conned his way into the most coveted role in the world, taking over from Sean Connery as James Bond despite zero acting experience, and went on to make a movie that many (myself included) consider to be the best in the series, On Her Majesty's Secret Service... and then promptly pissed away his sudden success... is certainly one deserving of this kind of lavish treatment!

Director Josh Greenbaum's Becoming Bond premieres at SXSW on March 11 and makes its streaming on Hulu on May 20. EW premiered the stunning trailer, which you can see below:

Now, if only Lazenby would finally write that autobiography he's been promising for years! Hopefully this movie will be a resounding success and spur him to do so.
Thanks to Sybil for the heads-up!
Posted by Tanner at 11:28 PM