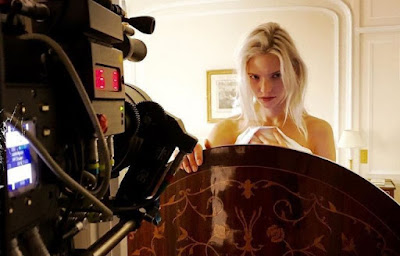 After the disappointing box office of Luc Besson's sci-fi epic Valerian and the City of a Thousand Planets, EuropaCorp is in trouble. Deadline reported in January that several suitors are lining up with aims to buy Besson's French studio, or at least its library of titles, with Lionsgate at the time chief among them. (Lionsgate itself has also been the subject of buyout rumors, with Amazon a potential buyer.) According to the trade, the company was "expected to discuss the sale of its assets, which includes its film library — consisting of movies such as Taken and The Transporter — with buyers at a Paris-based presentation" to be held in February.

According to a later Variety story, Netflix also entered the fray as a potential partner. The trade reports that when discussions between the streaming giant and Besson began, they were just about him directing several movies for Netflix, who have made a major push into original features in the past year. But apparently the scope of the conversations broadened, and now "as part of the deal, Netflix could also buy into EuropaCorp’s library, which has an estimated value of €150 million ($186 million) and includes such franchises as Taken, Taxi and Transporter."

This week, The Hollywood Reporter reported that EuropaCorp shares jumped 30% following French news reports that Netflix was closing in on a deal. According to a report originating in the French financial paper Les Echos, "the deal would see Netflix take over control and operation of EuropaCorp, but Besson would stay on as creative head of the company." The paper foresaw a deal being announced as early as next month's Cannes Film Festival. Deadline chimed in with a story that EuropaCorp itself is downplaying the coverage, confirming only that "indeed discussions are taking place with several potential industrial and/or financial partners," but neglecting to name Netflix or any other entities specifically. (The trade reports that Warner Bros, Sony, TF1, Vivendi and current EuropaCorp investor Fundamental Films, from China, are all in the mix as well.)

How does all this affect spy fans? Well, it could actually mean revivals of some of EuropaCorp's popular neo-Eurospy franchises, like the Transporter or Taken movies. (EuropaCorp probably ranks as the number one purveyor of neo-Eurospy content in the past decade, with other titles including From Paris With Love, 3 Days to Kill, Columbiana, and Lockout.) These intellectual properties are among the more appealing elements of the EuropaCorp catalog, and while the current regime at EuropaCorp has chosen to forgo further Liam Neeson Taken movies or Jason Statham Transporter movies in favor of an NBC television series (in the former case) and an under-performing prequel starring Deadpool's Ed Skrein (in the latter), a new owner might not feel the same way. It's possible, for instance, that Netflix might recognize the value in luring Statham back to the Transporter franchise. (The Skrein reboot, which was supposed to be the first in a new trilogy, reportedly happened because the studio refused to meet Statham's asking price.) Liam Neeson has publicly stated that he wouldn't reprise his Taken role of former CIA agent Bryan Mills again... but as another aging spy star once learned, never say never. (Neeson has also repeatedly forsworn further action movies in general, yet keeps coming back to them.)

Luke Evans appeared on Late Night With Seth Meyers earlier this year and revealed a few details about Besson's own next directorial effort, Anna. The project has been shrouded in secrecy besides the fact that, like Besson's hit Lucy (and the brilliant spy movie that put him on the map, La Femme Nikita), it will be a female-driven action movie. Evans confirmed that it's also a spy movie, saying it's about Russian assassins and he plays a KGB agent. (I don't know if this means it's a Cold War period piece, or if he's using "KGB" interchangeably with SVR or FSB.) Cillian Murphy and Helen Mirren also star, while Russian model Sasha Luss (pictured, who also appeared in Besson's Valerian and the City of a Thousand Planets) plays the title role. Lionsgate will distribute the English-language thriller. It seems possible that Anna could launch yet another lucrative EuropaCorp neo-Eurospy franchise.
Posted by Tanner at 2:01 PM