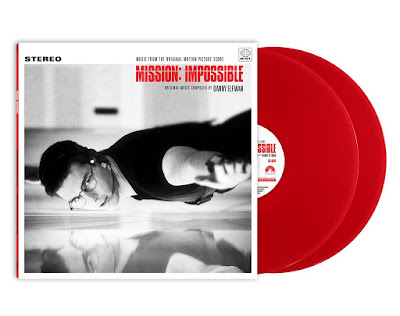 Austin-based T-shirt company turned record label Mondo announced today that they would release Danny Elfman's terrific score for Brian De Palma's original 1996 Mission: Impossible movie on vinyl in October. It will be that score's first ever vinyl release, as the film came out between the "death of vinyl" in the early Nineties and the format's miraculous resurrection in the past decade. (The movie's version of "The Mission: Impossible Theme" by U2's Adam Clayton and Larry Mullen, however, was released at the time as a 12" single for the DJ market.) Mondo's 2-disc release, sporting a retro-style record sleeve that will make a nice companion piece to the original 1960s Lalo Schifrin Mission: Impossible LPs, and liner notes by Austin composer Brian Satterwhite, will be pressed on 180 Gram colored vinyl. There will be a "Red Light/Green Light" edition (in honor of the film's explosive chewing gum), limited to 1,000 copies, and an unlimited translucent red version. (Hm... that's a tough call!) Both retail for $35, and are available for pre-order on the Mondo website, shipping in October. (Hopefully that gives them time to correct the spelling of Lalo Schifrin's name on the back cover!) Here's the track list: 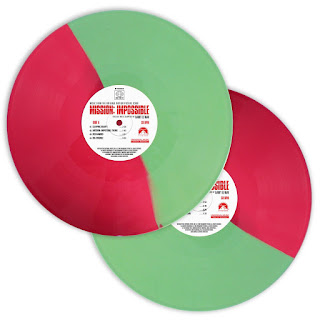 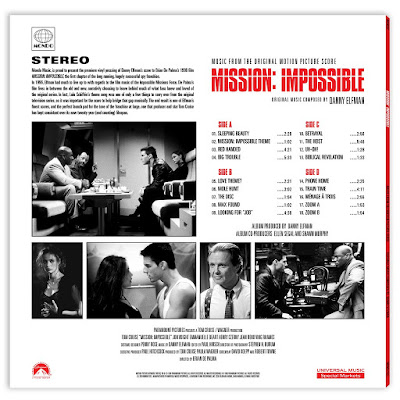 For those who want even more music from that movie, La La Land Records recently mentioned in a post on the Film Score Monthly Forum that they're working on an expanded, double CD release of Elfman's score that was supposed to be out for the 20th anniversary in 2016, but has (obviously) been held up. They hope to have it out next year. That will certainly be exciting! (They also mention they might do an expanded release of Joe Kraemer's score for Rogue Nation... but not until that movie's 10th anniversary in 2025. I would sure love to see all the source music from the opera included on that release should it happen!) 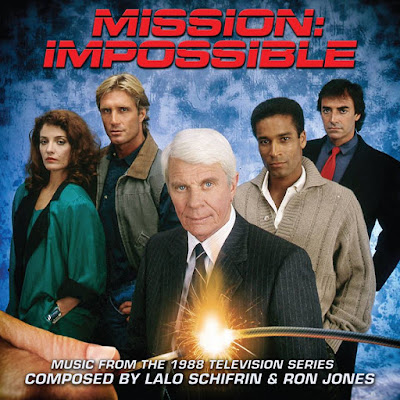 Meanwhile, La La Land's Mission: Impossible - Music from the 1988 Television Series, announced last week, is now available to buy from their website... which also offers some more intel on the album's contents. The 2-disc set seems to include nearly all the music original theme composer Lalo Schifrin (The Liquidator) wrote for the revival series (three episodes' worth) along with a good sampling of Ron Jones' (Star Trek: The Next Generation) work. While the official copy claims this release "showcases the series’ musical highlights over its two season run," all the episodes on the track list are actually from its first year, the 1988-89 TV season. So I remain hopeful (which is to say, greedy!) that perhaps in a few years we'll get a second volume containing some more Jones tunes and a healthy selection of John E. Davis's (Matt Houston) music for that series (a few tracks of which can be found on the GNP album The Best of Mission: Impossible... Then and Now). But before we get ahead of ourselves, let's just be thrilled about what they're offering right now! 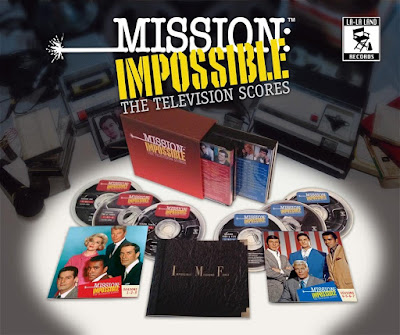 Finally, to celebrate the release of that new set, the company are offering their indispensable 6-CD box set from the original series, Mission: Impossible - The Television Scores (normally $100; details here) at the bargain price of just $80. Fewer than a hundred units of the limited run remain, so the fuse is burning rapidly down! The sale price is in effect through August 13.

Thanks to Mike for the heads up about the vinyl!