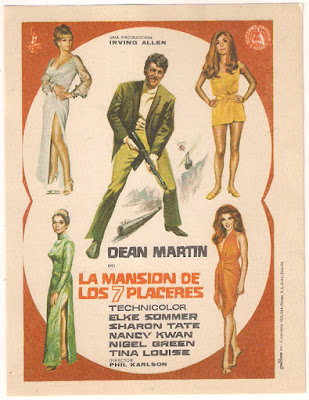 The June line-up at Quentin Tarantino's L.A. revival theater The New Beverly Cinema has lots to offer for spy fans! Foremost among them, in terms of big screen rarity, is a Sixties Irving Allen spy double bill of the fourth and final Matt Helm movie, 1969's The Wrecking Crew (advertised as being a gorgeous new 35mm print!) and the highly entertaining 1968 Eurospy movie Hammerhead. (Read my review here.) Like all of the Dean Martin Helm movies, the former (also starring Sharon Tate, Nancy Kwan, Tina Louise, and the villainous Deadlier Than the Male duo of Elke Sommer and Nigel Green) has relatively little to do with the gritty Donald Hamilton novel whose title it bears, but the latter is a pretty faithful adaptation of James Mayo's debut Charles Hood novel, despite changing hero Hood from a Brit to an American (Vince Edwards). This swinging double feature plays two nights--Wednesday, June 12, and Thursday, June 13. The first feature starts at 7:30, and the second at 9:45.

They'll also be showing Alfred Hitchcock's two late Sixties spy movies on consecutive Wednesday afternoons as part of their "Afternoon Classics" matinee series. Since these aren't among Hitch's most famous titles, they're also relative rarities on the big screen. I wish they weren't only playing during the day when I'll be at work! But should you be lucky enough to have Wednesdays off, be sure to check out "vibrant" IB Technicolor prints of Torn Curtain (1966), starring Paul Newman and Julie Andrews, on Wednesday, June 19, at 2pm, and Topaz (1969), based on the Leon Uris novel and featuring a Eurospy all-star cast of Frederick Stafford (OSS 117: Terror in Tokyo), Michel Piccoli (Danger: Diabolik), and Karin Dor (You Only Live Twice), on Wednesday, June 26, at 2pm. 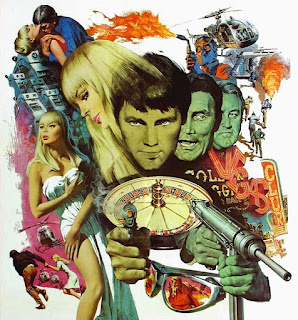 It should be noted that both The Wrecking Crew and They Came to Rob Las Vegas both feature in the latest trailer for Tarantino's upcoming 1969-set Once Upon A Time... in Hollywood (the former in a clip and poster, the latter flashing by in a billboard adorning the Chinese Theater).

Tickets for all shows are available through Brown Paper Tickets.
Posted by Tanner at 1:56 AM