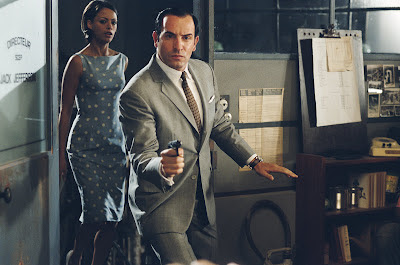 I had long since given up any hope of the comic French Eurospy revival OSS 117: Cairo Nest of Spies ever playing on American screens, thinking I would gladly settle for a legit US DVD release. Now--surprisingly!--thanks to Music Box Films, the 1950s set retro spy flick will indeed open theatrically in the States next month, on its way to a DVD release in the fall! Michel Hazanavicius' clever, loving parody opens May 9 in New York, San Francisco, Seattle and Los Angeles (at the Nuart Theatre). There's even a pretty fabulous American website set up, complete with trailer, stills, games and a brief history of Jean Bruce's literary creation, OSS 117!
No word on whether Chicago-based Music Box Films (named after and associated with my favorite Chicago revival house) plans a wider distribution at any point, but their website does indicate that they will issue the film on DVD in "Fall 2008."
Jean Dujardin (looking suitably Connery-ish thanks in part to Guillaume Schiffman's Sixties-style photography) plays an impossibly self-assured, pompous French secret agent who gives all Westerners a bad name in jet-age Cairo. The company's press material accurately describes the film as "a blithe and witty send-up not only of spy films of that era and the suave secret agent figure but also neo-colonialism, ethnocentrism and the very idea of Western covert action in the Middle East."
That's a pretty good description of this farce, which manages the neat trick of being both smart and slapstick at the same time.
Read my full review of OSS 117: Cairo Nest of Spies here.
Posted by Tanner at 11:09 PM

Man, I've been really wanting to see this one. This is great news.