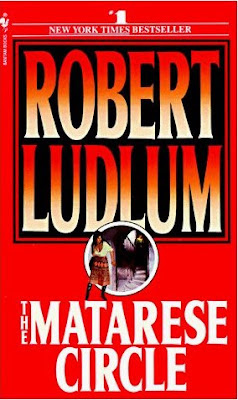 According to The Hollywood Reporter, MGM has beaten out Fox, Bourne studio Universal and others in an intense bidding war for Robert Ludlum's 1979 novel The Materese Circle. Variety adds that the studio is rumored to have paid $3 million dollars for the book deal. How does a 1979 book suddenly generate such heat? Simple: when Denzel Washington is attached to star! The project was shopped by ICM as a package with Washington attached to play American secret agent Bradley Scofield (no word yet on who will play his Russian partner, Vasili Taleniekov) and 3:10 to Yuma writers Michael Brandt and Derek Haas attached to pen the script. The Reporter points out that "Matarese could be attractive to studios seeking a new franchise" because "the property is the only other Ludlum invention [besides Bourne] to feature more than one novel; a second book, The Matarese Countdown, was published in 1997." They're not, strictly speaking, correct of course; Ludlum also penned a pair of related comedic novels, The Road to Gandolfo and The Road to Omaha. Still, the Reporter is basically right, as the former was originally published (in 1975) under a pseudonym, and neither is particularly attractive as a modern day film--or typical of the author.

I'm very excited about Robert Ludlum's sudden, posthumous, post-Bourne popularity in Hollywood. Most of his books would make excellent spy movies. I hope this deal creates some traction at Paramount on The Chancellor Manuscript, to which Leonardo DiCaprio is attached to star.

Variety reports that "Universal is developing a feature called Kill the Messenger based on the true story of journalist Gary Webb. The San Jose Mercury News reporter committed suicide after being the target of a smear campaign when he linked the CIA to a scheme to arm Contra rebels in Nicaragua and import cocaine into California." The studio optioned two books: Webb's own Dark Alliance: The CIA, the Contras, and the Crack Cocaine Explosion and Kill the Messenger: How the CIA's Crack-Cocaine Controversy Destroyed Journalist Gary Webb by Webb's friend/competitor, journalist Nick Schou. Peter Landesmann (Trade) will write the script from both sources, and Scott Stuber will produce. Landesmann describes the project as "the story of a reporter killed for telling the truth," and says "it's poignant and relevant as the CIA and U.S. government continue to make nefarious deals with the devil for what they believe is the greater good."

Also according to Variety, Gary Oldman is in negotiations to join the cast of Rain Fall, a film being adapted from Barry Eisler's bestselling book of the same name. Presumably Oldman would play the rotten CIA Station Chief in Tokyo. The book, set in Japan and featuring a Japanese-American hitman hero, is being adapted by director Max Mannix as a $7 million Japanese movie with roughly 85% Japanese language dialogue, according to the trade. I haven't read any of Eisler's books yet myself, but I've had them recommended by quite a few people now and they sound interesting; I'll have to check one out.

He may not have been Bond, but Clive Owen can't seem to get spying out of his blood. Following his role as an Interpol agent in Tom Tykwer's eagerly-anticipated (by me, anyway!) thriller The International, Owen will portray a corporate spy in Tony Gilroy's industrial espionage film Duplicity. Gilroy, the writer of all three Bourne movies as well as last year's Michael Clayton (which he also directed), spins a tale of what Variety calls "corporate one-upmanship" waged between business titans Tom Wilkinson and Paul Giamatti. Closer co-stars Owen and Julia Roberts "play two spies-turned-corporate operatives who work on opposite sides but are having a clandestine love affair." An intriguing premise, a great cast, a talented writer-director with lots of spy experience under his belt... Sounds like another one to look out for!
Posted by Tanner at 11:05 AM