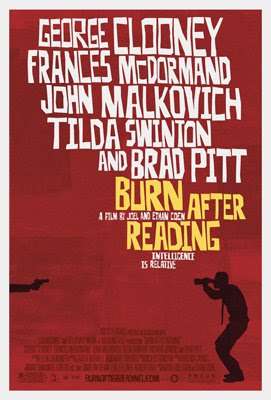 
The Coen Brothers begin their assault on the spy genre and the intelligence community itself before a single character has even appeared in Burn After Reading. The first joke is a font. As we zoom in from space, getting closer on satellite images of the earth and eventually Langley, VA and CIA headquarters, the titles are typed across the screen in a perfectly-chosen, slightly tech-y font. It looks just like the titles you might see in a 90s spy movie–maybe the Harrison Ford Jack Ryan entries. Even better, it makes the noise that such fonts inevitably make, a sort of squeaky beeping noise as each individual letter is input that sounds like it might come from a computer–although if you really had a computer that beeped like that at every keystroke, you’d probably end up smashing it after hammering out just a few sentences. By the time the camera zooms inside the CIA building, I was already laughing. The mere idea of a Coen Brothers movie beginning like a Scott Brother’s movie was hilarious to me–as I’m sure it was to the brothers. The biggest joke in the movie is really the mere fact that the Coen Brothers have made a spy movie.

As you might expect from such a venture, there’s not much actual spying in this film, if any. It’s a movie about spies, and would be spies, and the stupid things that they do. Like most Coen Brothers movies–the outright comedies and the so-called "serious" ones alike–it’s about people with very little intelligence of their own getting into something way over their heads–in this case in Intelligence itself.

From the satellite zoom, we finally end up inside a dull, unassuming office at CIA headquarters. Prim, proper, bow-tied analyst Osbourne Cox (John Malkovich) takes a seat opposite his boss, surprised by the presence of the others in the room. "Olson?" he inquires. "Isn’t he in–?"
"Yes," his boss assures him with a nod of his head, further perplexing Cox, before proceeding to strip him of his duty as head of the Balkan section. "You have a drinking problem," he explains, and Cox goes apoplectic. He feels that this move is political. Whether it is or isn’t is entirely beside the point for the rest of the movie, but it and his subsequent quitting set into motion a hilarious, coincidence-laden chain of events involving Cox, his "cold hearted bitch" of a wife, Katie (Tilda Swinton), her Secret Service agent lover Harry Pfarrer (George Clooney) and her divorce lawyer’s assistant’s trainer Chad (Brad Pitt), his colleague Linda Litzke (Frances McDormand)–who is also Clooney’s mistress–and their boss Ted (Richard Jenkins). I’m surprised I was able to summarize these relationships so succinctly! They’re all part of an insular, incestuous Beltway culture, and they’re all either screwing each other or spying on each other–and the Coens don’t seem to detect much difference between the two. Furthermore, they’re all being spied on from without as well, either by the CIA or by agents of various divorce lawyers.

J.K. Simmons plays an Agency section chief who receives regular reports on these characters’ doings from an underling (David Rasche) who never knows what to make of the intelligence he’s reporting. Without any sort of helpful analysis, Simmons’ automatic reaction to each shocking report (which quickly escalate from sex to blackmail to murder) is either to cover it up or "see what happens."

What happens, in short, is that gym workers McDormand and Pitt (who steals the show with his hilarious squinty-eyed stupidity) come into possession of Malkovich’s tell-all memoirs and try to blackmail him for the intel. When he refuses to acquiesce to the demands of morons (he sees Pitt as part of a "league of morons"), they decide to go to the Russians (one of whom is actually named "Krapotkin"), seeking higher remuneration from them. ("The Russians?" asks the perpetually flummoxed Simmons when he hears this. "Why would they go to the Russians?") All McDormand wants is enough money for several "cosmetic procedures" that her insurance won’t cover. Pitt has no idea what he wants, but he’s clueless enough to go along with her scheme.

The blackmail plot and a parallel plot about infidelity involving Clooney, Malkovich, Swinton and McDormand play out as classic farce until, this being a Coen Brothers movie, things get very suddenly violent halfway through. And then–again, this being a Coen Brothers movie–they continue to play out as a farce, albeit one with the occasional grisly shooting or axe murder.

Burn After Reading is a fascinating follow-up to No Country For Old Men, and one that ends up shedding new light on that masterpiece as well. It’s almost a companion piece, even though the two movies are complete opposites in tone and pacing. There’s a scene in Burn After Reading with Brad Pitt hiding in a closet, observing someone through the crack in the door. It’s a slow-build comedic sequence that had the audience in stitches, but the sequence was constructed almost identically to the one in No Country For Old Men where Josh Brolin sits in a dark motel room, watching Javier Bardem’s feet through the illuminated crack at the foot of his door. The brothers construct their suspense and their comedy the same way, and for them, there may be little difference. They often punctuate unbearable suspense with moments of levity (as in the excruciating climax of Blood Simple), or, as in one particularly memorable scene in Burn After Reading, punctuate an elaborate comedic setpiece with a burst of graphic violence.

The end of Burn After Reading also vaguely recalls the end of No Country For Old Men, which many viewers found frustrating. Viewers might find this ending frustrating as well, but most of them will probably find it more funny. This time, the joke is clear, and it’s on the intelligence community ("What have we learned?" asks J.K. Simmons. "Nothing?" replies his underling, probably summing up the brothers’ views on the CIA and Washington in general), but it’s also on us. In that light, I think it’s clearer that to some extent (and even though it came directly from the novel), the end of No Country For Old Men was a joke as well. A hilarious joke for the Coen Brothers on their characters, on their critics, and on their audience. But also for the benefit of all those parties, should they choose to view it as such. Life as it often turns out for their characters is so bleak, it must be a joke. The Coens use their "serious" movies, like No Country For Old Men, to comment on the absurdity of life and their madcap, absurdist ones (like Burn After Reading) to comment on its seriousness. Of course, as much as it’s a joke about politics and current events, it’s also a joke about spy movies in general. Most movies that begin with beepy text scrawled across satellite images could end with a question like "What have we learned?" and an answer like "Nothing?" (Not that that usually bothers me.)

It’s a funny ending to a supremely funny movie, and I don’t mean to distract from that with my digression into the brothers' larger oeuvre. Whether you care to laugh at real spies, at movie spies, at stupid people, or just at movie stars pulling funny faces, there are gags for everyone in Burn After Reading.

Read my review of the Burn After Reading DVD here, including a (positive) reappraisal of the film and discussion of the DVD extras.
Posted by Tanner at 12:26 AM