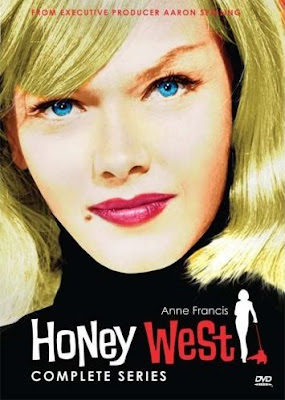 The genre may be private eye, but the tropes in Honey West come from the prevailing trend of the time: spying, forever bonded by Ian Fleming with glamor. Honey drives a Shelby Cobra sports car, dresses in exquisite fashions (favoring leopard skin, whenever tastefully possible), hangs out at upscale resorts and nightclubs and travels easily among wealthy circles. Whereas private eyes (in the American school of detection, anyway) had traditionally been presented as lower-class, down-and-out types barely making ends meet and living case-to-case, Honey West blended the profession with Fleming’s brand of prefab, jet age glamor. Supposedly, Aaron Spelling saw The Avengers on a trip to England, and decided the American TV market was ready for something like that. He’s rumored to have offered the part of Honey West to Honor Blackman, but found a fine substitute in Anne Francis. Like Blackman’s Cathy Gale, Honey is a thoroughly liberated woman, both sexually and physically. She’s an expert fighter, and predating Emma Peel by a year, she was the first action heroine seen on US TV screens. Honey’s adventures also echoed The Avengers’ penchant for the bizarre. In her sole season, collected on this set from VCI in its entirety, Honey faces such threats as rampaging robots (shades of the Cybernauts!), cat burglars dressed as Robin Hood and deadly pop art. She and her partner Sam Bolt also make use of all the latest in spy gadget technology, from lipstick radios to bugs and homing devices. VCI’s set sadly doesn’t include the episode of Burke’s Law on which Honey made her debut, but it does offer a selection of period commercials, including some promos for the series featuring Francis and her co-stars. This is a must-have set for fans of The Avengers and similar Sixties spy shows. Expect a full review shortly... 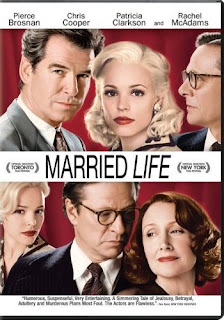 Pierce Brosnan turns in a masterful, nuanced performance in this spring’s little-seen Married Life, ably holding his own against spy stalwart Chris Cooper, who’s arguably one of the greatest actors of our time. Patricial Clarkson and Rachel McAdams round out the ensemble cast of this 1949-set domestic drama/thriller, each turning in reliably impressive performances. Brosnan, who also narrates the movie, plays a character whose actions should make him the most unattractive of the quartet, but manages the neat trick of actually making him likable despite that. Such a feat requires a unique blend of acting ability and pure charm, both of which Brosnan possesses in spades. If only his last two Bond movies had afforded him the same opportunities to show off those qualities as his more daring turns in films like this and The Matador! Fans of the actor owe it to themselves to check this one out. Amazon is still offering the DVD (which sports a great cover) at a whopping discount for only $9.99!
Posted by Tanner at 6:03 PM