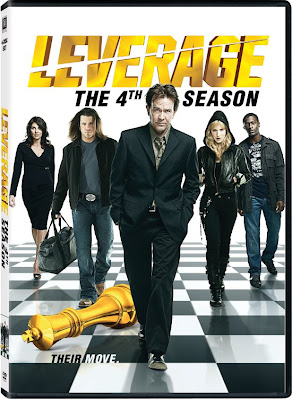 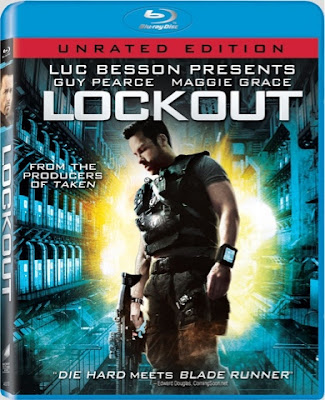 Also out this week from Sony Pictures Home Entertainment is the latest Luc Besson-produced neo-Eurospy actionfest, Lockout, on DVD and Blu-ray. Both formats contain an unrated cut of the movie (no theatrical version available, apparently, except streaming... but in this case, that's okay; the theatrical one felt a bit edited for content) and the featurettes "Breaking Into Lockout" and "A Vision of the Future: Production Design & Special Effects." There's also an Ultraviolet digital copy on the Blu-ray, which is even less noteworthy than a regular digital copy, but still worth mentioning because someone probably cares, I guess.... The gimmick with Lockout was that this time the neo-Eurospy action takes place... in space! And Guy Pearce is just the guy to pull that off. He makes a great wisecracking badass (sort of a cross between Burn Notice's Michael Westen and Escape From New York's Snake Plissken), and it's really too bad that this movie didn't catch on and do for his career what Taken did for Liam Neeson's. This genre seems like the right niche for Pearce, and I'd love to see him topline more neo-Eurospy titles from Besson's efficient action factory EuropaCorp. Lockout is no Taken, mind you, but it's a whole lot of fun, and personally I find the crossroad of spy and sci-fi pretty irresistible. (The spy plot is actually a surprisingly major one in the film for a movie that takes place mostly in an orbiting space prison.) Retail is $30.99 for the DVD and $35.99 for the BD, though both are substantially less on Amazon, natch.
Posted by Tanner at 12:47 PM

Guy Pearce is a terrific actor, but I thought this film was just terrible. Maybe it was the editing to get a PG-13 rating. Watch the red band trailers and you'll know what I mean.

The Guy Pearce film I always recommend to people is "The Proposition".