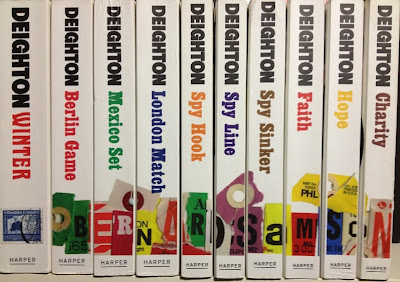 Well, here's the story to beat as the best spy news of the year! The Deighton Dossier reports that Len Deighton's greatest character (yes, even greater than the unnamed hero of The Ipcress File and its sequels) is returning to television... for an 18-episode maxi-series courtesy of Slumdog Millionaire writer Simon Beaufoy! The Hollywood Reporter reports that Clerkenwell Films, the production company behind Misfits, is developing an 18-episode maxi-series based on Deighton's classic Cold War series featuring Bernard and Fiona Samson. The 10-volume series encompasses three separate trilogies (Berlin Game, Mexico Set, and London Match; Spy Hook, Spy Line and Spy Sinker; Faith, Hope, and Charity) and a standalone prequel, Winter, which comes between the first two trilogies. These books, which brilliantly bridge the desk and field sides of the genre, are among my favorite spy novels ever. One day I shall get around to examining them in detail on this site, but suffice it to say that they are absolutely essential reading for any and all fans of espionage fiction or students of the Cold War. Again and again I see The Ipcress File listed as Deighton's best book (and there's no denying that it's a great read and made a wonderful movie), but to me the Samson cycle is the author's unequaled masterwork, and I cannot wait to see it adapted in its entirety. (The first three novels were filmed as Game Set Match for ITV in 1988, starring Ian Holm as Bernard, a series Deighton was reportedly unhappy with.) Oscar-winning screenwriter Beaufoy encapsulates everything that's wonderful about these novels very succinctly in the press release:


Deighton's masterful series of novels draws the hidden political map of the late twentieth century. It is all here: murders, honey-traps and spy swaps, the double-dealing and manoeuvring of nations jousting for position at the height of the Cold War, with Bernard Samson, the Bond with brains, giving it an almost Chandleresque sense of cool. The novels have at their heart a love story of Shakespearian proportions, taking in passion, betrayal, loyalty and the lengths we will go for the love of country and the love of one another.

Deighton himself is fully behind the new adaptation. A few years ago, Quentin Tarantino expressed an interest in filming the first three novels, but the author has always held out for an offer from a film company who wanted to adapt the entire series. Now that's come. My only regret is that it's just 18 episodes. Assuming these are hour-long episodes, and assuming Winter isn't part of the deal, that only allows two hours per book. The 1988 series was able to devote four to each of the first three volumes. But I trust Beaufoy to figure that out! And who knows? If the series is a success, perhaps we'll see Winter become a miniseries in its own right down the road. With a story spanning five tumultuous decades, it certainly could.

This is now officially the spy project I am most excited about on the foreseeable horizon. I hope it comes to fruition!
Posted by Tanner at 1:05 AM

That's awesome news! I've only read the Game/Set/Match trilogy, but I've been meaning to read the rest. Although, now I want the set featured in your post. I love the spines that spell out Samson's name. Cool!

Yes, definitely read the rest--and Winter. That one's dense, but definitely worthwhile. Those are the latest UK paperbacks with the cool Samson luggage tag spines. I do love the way they look on my shelf! You can get them from Amazon UK and sometimes The Book Depository, and I think you can also find most of them from sellers on the US Amazon as well.

This gives me a whole new reason to live.

It is cool news. Hoping to catch up with Len sometime before the summer, and might get some more background on the decision. Clearly, he's waited a long time to sign the right deal, since the 1988 series came out which he balked, so he must be happy that they'll do it justice.

Great news, these are some of my favorite books.

About those spines, yes I think they're great too. I've got the entire collection of US 1st editions, and while I love them, I can't stand the way the art direction abruptly shifts from Spy Line to Spy Sinker (Deighton changed publishers). I like things that flow, and spine-wise, mine don't.

Still cool that you've got all the First Americans, Nick! I've only got these books in paperback--albeit the cool UK ones pictured! But I agree about the US spines. I also get annoyed when they change so drastically like that. The UK Firsts have very nice matching spines though. And at least the first trilogy of US ones do as well!

This is Deighton's masterpiece and although his 'Spy With No Name' novels were very interesting stylistically and 'The Ipcress File' remains the greatest entry to the genre post 'Casino Royale', I didn't find the stories themselves that interesting. It was more the way they were told.
The Samson books, on the other hand, remain the greatest series in espionage fiction.
Have we any further news on this project?

Sadly, there's been no further news that I know of since this announcement was made. I really hope it happens! I agree that the Samson books are, collectively, a masterpiece, and in a market so enamored of 1980s spy stories (The Americans, Deutschland 83, and more) and adapting series of books (Game of Thrones, Outlander), I would think many networks would be eager for such a fantastic series! So why haven't we heard anything? I don't konw. I hope we do soon!