007 in Verse: James Bond Returns in New Book... of Poetry 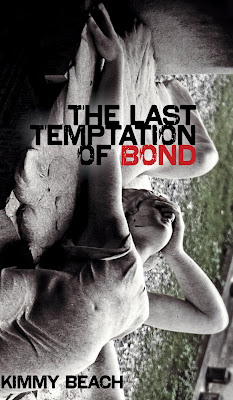 This one kind of slipped under the radar. In February, a new James Bond book was published! And it's the first one to be written in verse. Canadian poet Kimmy Beach has concocted an epic poem about 007 entitled The Last Temptation of Bond, published by the University of Alberta Press. On her blog, Beach calls the project "in part — my take on Nikos Kazantzakis’ 1960 novel, The Last Temptation of Christ." Here's the publisher's full description:

Beach is apparently a Bond fan. Among the many interesting insights into "her Bond" that Beach provides on her blog is the fact that she had a longstanding Saturday ritual of watching Casino Royale (I'm guessing she means the Craig version) with a steady supply of Vesper martinis and quoting along, sometimes rewriting it as she went! Clearly, she knows how to spend a Saturday afternoon. The Last Temptation of Bond is available on Amazon.
Posted by Tanner at 5:47 PM

Wow! Awesome. How great of you to talk about my new book like this. I hope you'll like it if you get your hands on it. In the meantime, thanks so much for blogging about it. I really appreciate it!

Thanks for stopping by, Kimmy. I look forward to reading your book when I do get my hands on it!