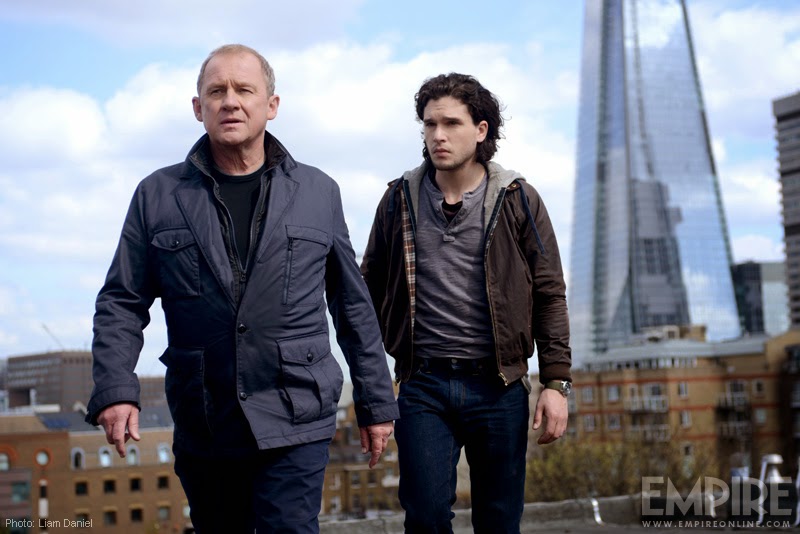 Empire (via Dark Horizons) has the first details on the new big-screen movie version of the long-running UK spy series Spooks (known in the U.S. as MI-5)—and this picture of series star Peter Firth (The Hunt for Red October) reprising his role of spymaster Harry Pearce, and newcomer Kit Harrington (Game of Thrones) as MI-5 agent Will Crombie. Director Bharat Nalluri (a veteran of the series) told the magazine that the movie, Spooks: The Greater Good, will have a much larger scope than the TV show. "The canvas is huge on this," he said. "We’re running from Moscow to Berlin to London. It’s a story of the old world and new world.... We’ve got motorbikes, attacks on convoys, huge sniper sequences in the middle of London. It’s set piece after set piece." The movie is designed to be accessible to new viewers who haven't seen the show, so it will largely focus on new characters. Harrington will be joined by fellow newcomers Tuppence Middleton (Cleanskin, The Lady Vanishes), Jennifer Ehle (Zero Dark Thirty) and Elyes Gabel (Exit Strategy). The only other series veteran officially slated to return is Tim McInnerny as Harry's slippery colleague on the Joint Intelligence Committee, Oliver Mace, though Nalluri also hints that Matthew Macfadyen, who starred on the show's first two seasons and then made a surprise appearance in the series finale, might pop up as Tom Quinn. The movie's plot finds MI-5 mired in scandal after letting a terrorist escape during a routine handover, and Harry's career in shambles. "You could say that Harry is having a Nick Fury moment," says Nalluri, alluding to events in Captain America: The Winter Soldier. When Harry disappears amidst his agency's turmoil, it's up to Crombie to get to the bottom of the disappearance and find out what's really going on. The movie is scheduled for release in Britain in 2015; I really hope they get a U.S. distributor as well! The series was pretty excellent, and the prospect of it transitioning to a regular film franchise sounds like a very promising one to me.

Yes, I'm looking forward to this.

I enjoyed MI-5 (or 'Spooks', as we know it in the UK), but my interest tailed off after about the fourth series and I don't think I watched the rest. I might pick them up some time as they're fairly cheap now.

The feature film sounds intriguing and I do hope the Tom Quinn chaaracter returns - he always seemed to be one of the most realistic characters. It got a bit James Bondish with Penry Jones et al later on....

Yes, I agree for a show that started out down-to-earth, it suffered around Season 5 (with Penry-Jones) from 24 Emulation Syndrome and got pretty outlandish. But Season 5 reigned things back in, and turned out to be one of the best, so you should definitely check it out! I, too, fell out of watching it during Season 7, when Richard Armitage became the lead. I definitely want to watch the rest of it at some point though - hopefully before the movie. (Though it doesn't sound like that will be necessary.) In America, all the seasons are available streaming on Netflix. And I, too, hope that Tom Quinn pops up in the film! He was the best lead.

I'm watching them now for the first time, and I felt that after series two it lost much of the realistic feel that forced me to keep watching. I couldn't wait to find out what happened next during those two series but like you said, it has a more "Bondish" feel to it after that. I believe that the audience could readily identify with each character at first, and that was the basis for its appeal to me. I do hope that as I continue to watch, it returns to that. And I agree that bringing Quinn back would be brilliant, as long as his character remains the same. In other words, as long as he isn't some action hero with an adrenalin addiction. As I watch now it seems like the team, except those few that are still around from before, look like supermodels in one action sequence after another.
Perhaps it is somewhat close to reality, but far less believable in just about every way than what it was like in the beginning. I think in a film they should try to come back to that.