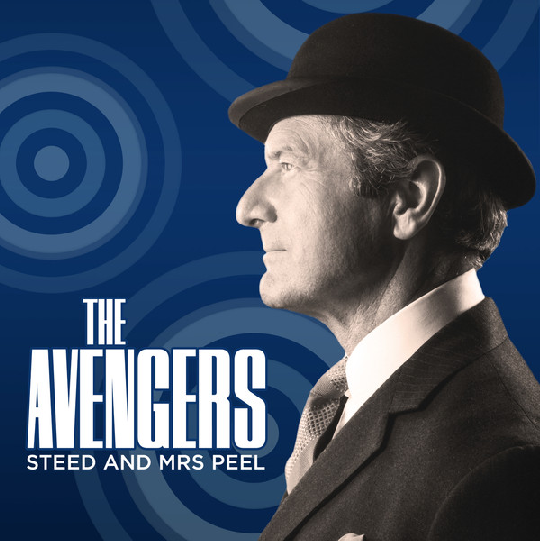 For the past two years, UK company Big Finish has been producing top-notch, full cast audio dramas (what we might have once called radio shows) recreating the lost episodes from the almost entirely missing first season of The Avengers. These episodes predate any of gentleman secret agent John Steed's more famous female partners like Cathy Gale or Emma Peel, and find him teamed with a male amateur instead—Dr. David Keel. On TV Dr. Keel was played by Ian Hendry, and Steed was of course played by the incredible Patrick Macnee. In the Big Finish audio dramas, Anthony Howell (Foyle's War) and Julian Wadham (Double Identity) step into those respective roles and do so as perfectly as any fan could hope for. Steed in particular is at once instantly recognizable as Macnee's Steed, and yet at the same time very much Wadham's. It's a brilliant interpretation.

Last month the company (who made their name producing quality Doctor Who audio adventures) announced the next phase of their Avengers license. Alongside the continuing Lost Episodes line of recreated first season episodes, they will introduce Steed's most famous partner, Mrs. Emma Peel (originated on the series by the frankly inimitable Diana Rigg). Wadham will continue to play Steed, and the company are currently searching for an actress to play Emma. Presumably it has not escaped their attention that the perfect choice would be Dame Diana's daughter, Rachel Sterling (The Game)! She actually sounds quite a lot like her mother while being a supremely talented actress in her own right, who would no doubt bring the same blend of new and old to the role that Wadham does with Steed. I suppose it's possible that Ms. Sterling might not wish to step into her mother's most famous role, but she's shown no qualms in the past about aligning her career with Rigg's. She played Rigg's role from the film in a stage version of Theater of Blood, and appeared alongside her mother in familial roles on a recent episode of Doctor Who. Yes, Rachel Sterling would be the perfect choice to revive Emma Peel in new audio dramas! I hope it happens.

But what are these dramas based on, if all the Emma Peel era episodes thankfully survive? In an interesting choice, Big Finish will adapt them from the Avengers comics that ran in the UK children's magazine Diana (not named after Rigg) from 1966-67. That's... an interesting choice. The Diana comics are highly sought after and well worth reading, but that's for their gorgeous artwork (by Emilio Frejo), not for their stories. The storylines tended to be rather sophomoric, relying on the cliches of kiddie comics of the era rather than the sophisticated wit of the TV series. (One adventure saw Steed and Emma protecting England from a new wave of Viking invasions, a theme that seemed to weigh heavily on the minds of British children in the Sixties. That plot was, if you can believe it, used twice in Avengers comics, and also in comics based on other popular spy shows of the decade!) Since the artwork can obviously not be translated into an audio drama, the story is the aspect that will carry over. Luckily, each of the eight Diana storylines ran for only six pages, spread out over the course of three issues. So Big Finish's writers will have plenty of room for embellishment and improvement in the course of adapting them into hour-long audio dramas! The advantage the comics had over the TV show was that they weren't restricted by budget, and so we saw things like ski chases and helicopter crashes that simply wouldn't have worked on the series. The best place to learn more about these comics, including complete synopses of each one, is on the wonderful website The Avengers Illustrated. You can even read my reviews (as a contributor, before I had my own spy blog) on the first two Diana stories there! (My review of Story 1, and Story 2. And for fun, but with no bearing on this news story, you can also read my reviews of some New Avengers comics here.) You can also see examples of Frejo's beautiful artwork.

Which brings me to the other exciting aspect of this venture. In addition to putting out audio dramas based on the comics, Big Finish will also publish a graphic novel collecting all of those rare and sought after Diana comics for the first time ever! This is huge news in its own right. None of the Sixties Avengers comics have ever been reprinted before. (Though Boom! Studios have done a great job of collecting the 90s Steed and Mrs. Peel comics by Grant Morrison along with several volumes of their own current take on the characters.) It will be great to have all that beautiful Frejo Avengers artwork bound together in a single bookshelf volume! (I wonder if it would be possible for Big Finish to secure the rights to the terrific black and white comic strip "The Growing Up of Emma Peel," which ran in the comics anthology June and followed the adventures of 14-year-old Emma Knight long before she ever married pilot Peter Peel or met the mysterious John Steed? It would make a fantastic bonus feature in such a collection!)

Now for the bad news: all of this is a long way off. A whole year away in fact. According to Big Finish's website, the eight episodes of The Avengers - Steed and Mrs Peel: The Comic Strip Adaptations will be released over two box sets in April and November of 2016, and the graphic novel will also be out that November. All of them can currently be pre-ordered in various configurations, as either digital downloads or lavish CD box sets. There are also cost-saving deals on various bundles. (And you always save money by pre-ordering with Big Finish.) In the meantime, though, be sure to pick up the continuing releases of The Avengers; The Lost Episodes! Volume 4 is due this July.

As previously reported, Big Finish also have new audio dramas based on The Prisoner in the pipeline. I hope they continue to add other classic British spy and adventure series from the Sixties to their roster! It would be great to hear new adventures of Jason King or Man in a Suitcase... though what I'd like most of all would be to hear audio adaptations of the lost episodes of Adam Adamant Lives! and Callan.

A big thanks to Phil for the tip on this exciting news!
Posted by Tanner at 3:12 AM

I think it's great that they're doing Peel episodes. I was never at all interested in the Keel era. To me, that wasn't The Avengers.

You're welcome! I'm actually quite keen or reading those daft comic strips!

Oh, I'm VERY keen on getting those daft comics! I hope I didn't come off as otherwise. That's really the most exciting part of this news for me. I just wish that Big Finish wasn't going to be beholden to them for the plots...

Dave, I agree that the Keel era definitely isn't the first thing I think of when I think "Avengers." But I actually like every era of the show. My favorite is definitely the Emma Peel era. But I have a healthy appreciation for Cathy Gale as well, especially those more grounded, earlier ones. I have a real soft spot for Venus Smith. I like the more blatantly manipulative Steed of that era. I was never very big on the original David Keel era, though, based on the two and a half or whatever surviving episodes. However, Big Finish turned me around on that opinion completely! I think the problem is that it's just not the best episodes that survive. But it's that manipulative Steed that I love (still with his usual charm and class, though), and it just really, really works on audio! They're not CLASSIC Avengers, no, but I definitely recommend them.

I would love to see Big Finish find a way to do some Cathy Gale stories, too, eventually, and even Venus Smith. Martin King I can do without.