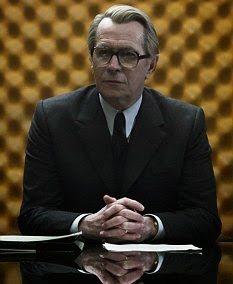 It's been quite a while since we've heard anything on the Smiley front about a follow-up to Tomas Alfredson's fantastic 2011 Tinker Tailor Soldier Spy (review here). More than two years ago, StudioCanal Chairman and CEO Olivier Courson revealed, "We are working on Smiley’s People with Working Title. It’s still at the development stage - but, yes, the old team of Peter Straughan and Tomas Alfredson is back together." Now, Tinker co-writer Straughan has just scripted Wolf Hall, the popular and well received miniseries adaptation of Hilary Mantel's bestselling novels about Thomas Cromwell and Henry VIII. The Writers Guild of America's official magazine, Written By, interviewed Straughan about the miniseries for their current issue, and in the course of the article casually drops this previously unreported tidbit: "Currently, [Straughan] is adapting the Le Carré novel Smiley's People for HBO. It's another huge task...." HBO? That's interesting! HBO was not involved in Tinker Tailor Soldier Spy, which was produced by StudioCanal and Working Title Films, and distributed in the U.S. by Focus Features. The film performed better and made more of a critical and cultural impact in Britain (where it won two BAFTA Awards) than the States, so I suppose it's possible that StudioCanal couldn't find a theatrical partner in the U.S. and instead opted for TV.

HBO has indeed proved a refuge lately for A-list filmmakers with adult projects. Steven Soderbergh famously made his dream project Liberace there after every film studio in town reportedly passed on a theatrical version despite the attachment of stars Michael Douglas and Matt Damon. It's also possible that HBO Films might be involved in a theatrical venture. While most of their theatrical features, like this summer's Entourage, are based on existing HBO shows, they did offer a limited run of the documentary Going Clear last month. The involvement of HBO also raises the intriguing question of whether the Seventies-set sequel, which Straughan has previously said would incorporate some elements of the second novel of the "Karla Trilogy," The Honourable Schoolboy, with the bulk (and title) of the third, Smiley's People, might emerge as a miniseries instead of a feature. It was, of course, previously filmed that way by the BBC in 1982. Personally, I would bet not. I would hazard a guess that we might be looking at a StudioCanal/Working Title/HBO co-production released theatrically in Britain and Europe and airing on HBO (perhaps in conjunction with a limited, Oscar-qualifying theatrical run) in the United States. But I would sure love some sort of official announcement that might shed some more light on the subject! It's a pity Written By didn't ask a follow-up question for clarification.

As long as the key team of Alfredson (Let the Right One In), Straughan (The Debt) and cinematographer Hoyte Van Hoytema (SPECTRE) all return, and key actors like Gary Oldman, Benedict Cumberbatch and Ciaran Hinds are involved, I don't much care if I see the sequel in a theater or on TV. Just so long as we get to see another Oldman Smiley movie! If HBO were to bring substantial extra funding to the equation, though, what I would really like to see would be the Hong Kong-set Honourable Schoolboy as that follow-up before concluding the trilogy with Smiley's People. Alas, it seems unlikely we'll ever see that masterpiece properly adapted due to cost issues. And I can hardly complain about a new version of Smiley's People, which is also a wonderful novel!

Read my article "George Smiley: An Introduction" here.
Posted by Tanner at 2:57 AM

I'm an atheist, but having this production go smoothly with the full team on board will be in my prayers tonight, when it comes to something this important it can't hurt to try.

I'm an atheist, but having this production go smoothly with the full team on board will be in my prayers tonight, when it comes to something this important it can't hurt to try.