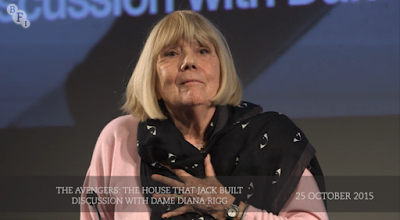 As we first heard back in September, the greatest female spy star of all time, Dame Diana Rigg (star of The Avengers and On Her Majesty's Secret Service) did a Q&A following a screening of a classic Avengers episode at the British Film Institute last week. I was so disappointed not to be able to fly to London for that event, but now BFI has been kind enough to put video of that Q&A (moderated by BFI curator Dick Fiddy) up on their website! She is completely open, candidly discussing a number of aspects of The Avengers and her career at large. Wearing a scarf that evokes the door to Emma Peel's flat, Rigg happily discusses a number of topics including her co-star, the late, great Patrick Macnee ("He was a deeply generous, dear, dear man, and I grieve his passing"), her predecessor Honor Blackman ("who's wonderful"), her character Emma Peel ("Dear God, was I lucky to get a chance to play this woman!"), the leather catsuits ("They were deeply uncomfortable, and hot, and sticky"), the cars ("they were very hard to drive!"), her delight at the remastering of the episodes on DVD ("I've been restored!"), the directors ("I was working with these brilliant men, and I didn't know it, and that is a great regret of mine, because I would have paid them homage had I known"), Emma's place in feminism ("I truly do think that she was a very, very potent influence in women claiming their place in the world"), Theater of Blood ("that film was such fun!"), Avengers writers ("Brian Clemens was brilliant"), On Her Majesty's Secret Service ("they had pots of money to spend on the Bond, which we didn't on The Avengers"), and George Lazenby ("George was not bad! He was not. He was just boring off [camera]!"). She also touches on The Sentimental Agent, "The Hothouse" (which she'd never seen), Euripides, Ian Hendry, Guy Hamilton, Vincent Price, Mark Gatiss, Doctor Who, and even Friends. This video is just so must-watch you shouldn't even still be on this page. Go watch it! Now! It's great!

Watched it? Great! Now for more on that auspicious day at BFI, check out a fan's perspective on meeting an icon at Home Arty Home, and then check out a collection of Avengers-inspired pop art that was on display at the event at Art & Hue. Great stuff! (Thanks to Art & Hue for the links.)
Posted by Tanner at 1:50 AM

You're most welcome for the links and thank you so much for mentioning Art & Hue!