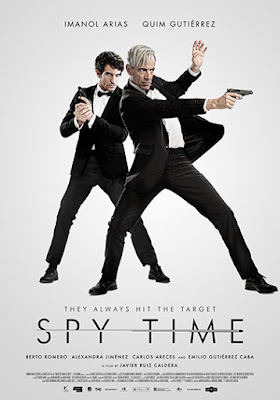 It's a big week for father/son spy duos. Hot on the heels of that Extraction trailer, check out the trailer for Spy Time, the new, big-budget Spanish language neo-Eurospy movie from Film Factory Entertainment. This looks great, so I really hope it gets a U.S. release! Here's the studio's synopsis:


This Christmas is going to become a living hell to Adolfo. Not only does his girlfriend leave him for being a guy with no ambition who works in a security company, but to top it off, he becomes the objective of a series of thugs led by Vázquez, a dangerous criminal who just escaped prison.
What did he do to get into such a mess?
It's then that he discovers taht his father has a double identity. He's not the sausage maker living out in the countryside on his farm that Adolfo always thought he was. He's Anacleto, a secret agent in a slump and the man who locked Vázquez away thirty years ago. Adolfo will have to venture out of his comfort zone and work with his father, the person he gets along with least in the world, in order to survive Vázquez's vengeance and to try to win his girlfriend back, all while making it through shootouts and chases.

Nice!
And im glad i was able to find a free HD movie of this online.
Found it here -> SPY TIME 2015 hd movie. Im watching it now!