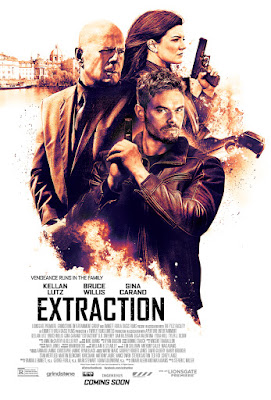 We first heard about Extraction back in February, and I wondered if it would get a theatrical release. Happily, Deadline reports that it will get at least a limited theatrical release on December 18 from Lionsgate Premiere, though it also premieres On Demand that same day. Bruce Willis is making a bit of a niche for himself now playing CIA agents' dads. He did it in the last (terrible) Die Hard movie, with the charmless Jai Courtney as his agent son. He did it in The Cold Light of Day with Henry Cavill for a son. And now he's doing it again in Extraction, this time with Kellan Lutz (The Expendables 3, The Twilight Saga) as his son. (In the latter two, Dad plays second fiddle to his boys.) Gina Carano (Haywire) co-stars as a CIA agent charged with tracking down Lutz after he goes AWOL to rescue his missing agent father. Check out the trailer: