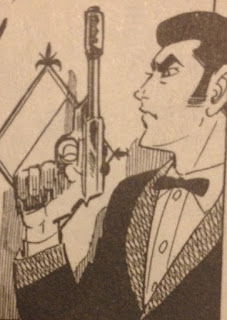 For years I've been searching for copies of the Japanese James Bond comics (known as manga) from the Sixties. But vintage editions (first collected in the Sixties, and reprinted in the early Eighties) tend to command a premium on Ebay on the rare opportunities they come up. So I was absolutely thrilled to discover recently that for the first time in more than 30 years, they are back in print! Four Ian Fleming novels were licensed to Saito-Production Co. Ltd. at the height of Bondmania in 1964, and manga adaptations were produced over the next several years. The four titles are all now finally available again in 300-page paperback collections with, naturally, Japanese text. Live and Let Die, Thunderball, On Her Majesty's Secret Service, and The Man With the Golden Gun can now all be ordered from Amazon.jp. (Use your browser's "translate" option to be sure what you're ordering.) And the shipping is fast. I ordered mine on Monday with standard international shipping, and had them in my hands by Friday. 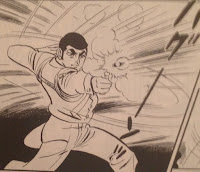 Very little has been written about this crucial chapter of Bond history in Western publications. Even the most comprehensive book on 007 in comics to date, Alan J. Porter's James Bond: The History of the Illustrated 007, devotes little space to these works (probably owing to their longstanding elusiveness). But it's still the best source for publication details. According to Porter, "the manga Bond first appeared in serialized form in an anthology titled Boys Life from Shogakukan Inc, and were later collected ... in 1966 under the Golden Comics imprint. While the manga Bond stories were critically acclaimed, the holders of the Bond literary license withdrew permission [for future adaptations]." Porter speculates that this may have been because the manga "diverted so far from the source material."

At 300 pages for each novel (and Fleming's novels are all fairly short), it's not surprising that the stories were expanded upon in their graphic adaptations. While the first one, Live and Let Die, seems to hew fairly closely to Fleming's narrative with a few key additions and changes (more on that below), subsequent stories appear to deviate further and further from their source material. While I can't read the Japanese text, looking at the pictures it appears that On Her Majesty's Secret Service features two main male villains—a bald Blofeld (presumably) and someone else with a goatee and hair that twists into devil horns. (All the stories seem to feature an increased number of baddies.) And no sign of Fraulein Bunt. There's also a lengthy sequence where, prior to making his ski escape from Piz Gloria, Bond is made to dress like a gladiator and do battle with lions in an arena. (See above.) And The Man With the Golden Gun, as best I can glean from flipping through it, appears to have very little indeed to do with Fleming's story—though certain key setpieces remain in place, as does the Jamaican setting. 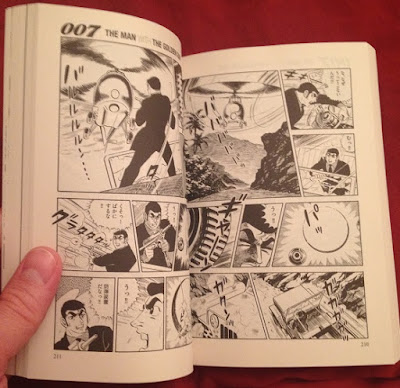 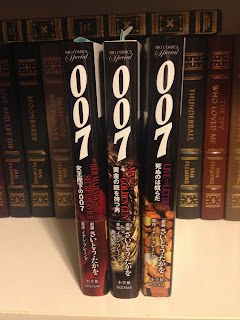 The writer and artist of these adaptations was none other than Takao Saito, who would find fame shortly afterwards creating Japan's most famous and long-running espionage manga series, Golgo 13. Golgo 13 is an assassin who may have fewer scruples than 007, but gets into very similar sorts of adventures and certainly bears a close resemblance to Saito's Connery-inspired James Bond. (The two share a penchant for white dinner jackets over black dress shirts in Saito's illustrations, as well as distinctive eyebrows and sideburns.) Glidrose Publications (precursor to IFP) revoked the Bond license in 1967 and Saito began publishing Golgo 13 stories in 1968. It has been suggested that his early Golgo 13 stories were nothing but a continuation of what the artist had been doing with 007, merely under a new title. 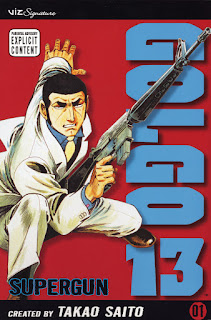 Whatever the circumstances of his origin, Golgo 13 (also known by the alias Duke Togo) went on to enjoy a robust transmedia career. Besides an ongoing manga series now 179 volumes long, the character has starred in two live action films (the second and better known of which, Assignment: Kowloon, starred Sonny Chiba), two anime features, an anime TV series, and six video games. (My own introduction to the character came via Nintendo in the late Eighties.) Viz has published a number of the Golgo 13 manga in English, though not in their original publication order. (Read more on Golgo 13 at Permission to Kill.) 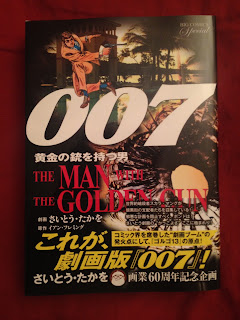 Returning to Saito's James Bond work, these manga collections are no mere footnote in Bond lore. In fact, running a cumulative total of nearly 1200 pages, they're actually the most significant 007 publications in the graphic novel medium to date! Their republication, officially authorized by Ian Fleming Publications (whose hummingbird logo, seen on last year's continuation novel Trigger Mortis, and circular "007" logo, seen on past IFP products, both appear on these editions*) is consequently the most significant Bond reprint in a long time. While it's great to have them in the original Japanese, it is my sincere hope that IFP works with Dynamite Entertainment (who hold the rights to reprint all James Bond comic books, which I assume includes the manga) to produce English translations for the vast Western market who have never had an opportunity to read these stories in any format. Something along the lines of the excellent reprints of Sixties Batman manga that DC have been recently publishing, giving English speaking readers their first chance to read that series in its entirety. Until such a time, however, I strongly encourage Bond fans with an interest in comics to import these Japanese volumes.

The new reprints, published by Shogakukan under the banner of "Big Comic Special," are, like all manga, designed to be read from right to left and therefore printed in a way Western audiences might call backwards. It takes a little practice, but after early attempts at translating manga into English that reversed the images (which created its own set of issues) so the stories could be read front to back, millions of Western manga fans have gotten used to reading comics this way, even in English, and it's really not very difficult. (What is difficult, for me anyway, is reading Japanese! I tried using the Google Translate app on the panels, but ended up with mostly nonsense.) They are thick paperbacks, roughly 5x7". Like many Japanese paperbacks, these volumes have dust jackets. And there's even another, smaller strip sleeve on top of the dust jacket promoting SPECTRE with a picture of Daniel Craig in a still from the film. 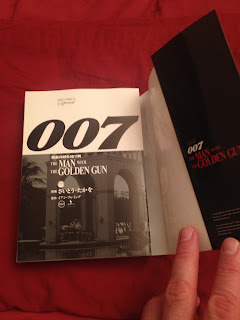 Beneath the busily illustrated dust jacket, the book itself has an entirely different cover devoid of all the extraneous text that eclipses the outer cover. These simpler monochromatic illustrations could easily be confused for covers to the actual Fleming novels. Live and Let Die depicts gold coins; On Her Majesty's Secret Service displays an Alpine mountainscape, and The Man With the Golden Gun shows Jamaican scenery.  (I don't have Thunderball yet.) 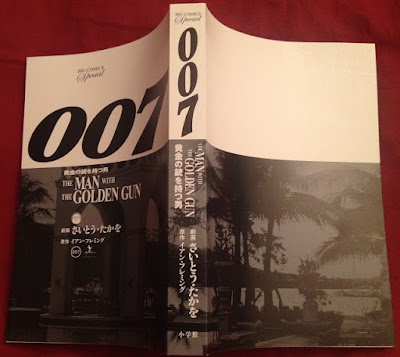 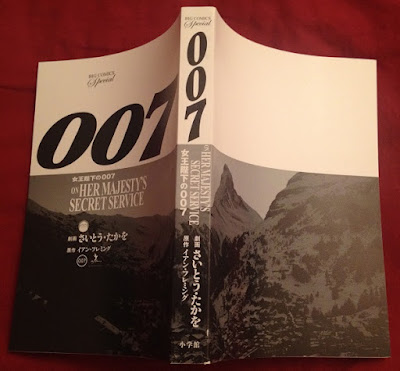 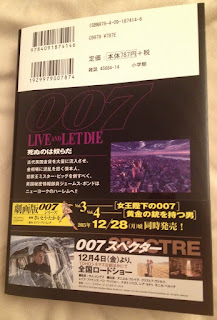 Live and Let Die, as I said above, appears to be fairly faithful to Fleming with the alarming exception of apparently replacing Quarrel with an annoying little white kid! Action has been added where you would expect action to be added when going from a novel to a more visual medium like comics (or movies, for that matter). For example, Bond and Solitaire's railroad journey from New York to Miami now includes a fight on top of the moving train. There are some extra chases and fights throughout, and there appears to be a new (white) henchman in Mr. Big's ensemble. Saito actually prefigured the 1973 Roger Moore movie by dressing 007 in a black shirt with a holster over it when he busts up the voodoo ceremony, which has been greatly expanded to include a huge altar in the best pulpy tradition. 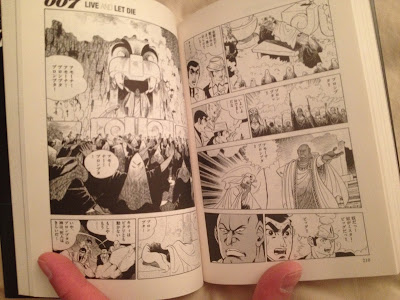 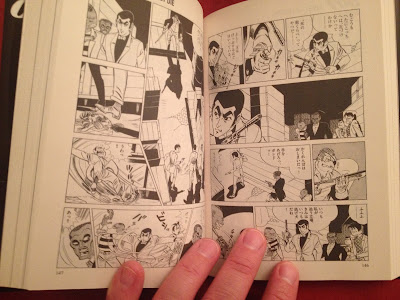 On Her Majesty's Secret Service is notable for its bald, eye-patched depiction of Blofeld. (Assuming that character is indeed Blofeld.) This is a far cry from Fleming's description of the villain in that book as being tall and slim. Furthermore, while Blofeld drastically altered his appearance from book to book, I don't believe Fleming ever described 007's archenemy as being bald. Or as having a damaged eye. One has to wonder if members of the You Only Live Twice film crew saw this comic (which was originally serialized in 1966, and would have been available and probably ubiquitous while they were location scouting in Japan) and if it had any bearing on Donald Pleasence's iconic look as Blofeld—bald, with a horribly scarred eye. [STOP THE PRESSES! It turns out (thanks to some rough translation by my friend Stu) that this character is not Blofeld at all, but Mr. Big (which explains his darker coloring), who we last saw at the end of Live and Let Die aboard a pirate ship that was about to explode. (Unless he also stood in for Ernst Stavro in Saito's Thunderball.) Apparently the explosion must have damaged his eye. Can you imagine Fleming's Mr. Big presiding over an Alpine fortress? Well, given the timing and location, I still contend he could have been a model for Pleasence's Blofeld.] 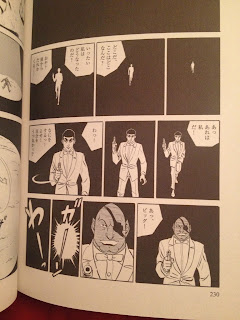 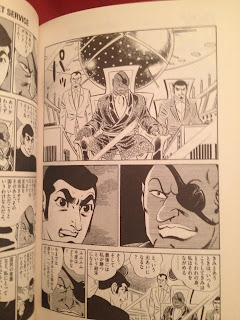 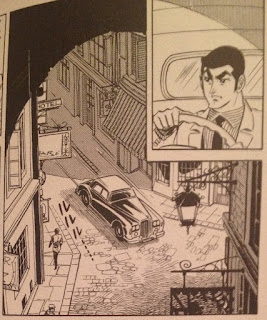 While OHMSS retains the overall plot and setting of the book, it also adds and embellishes. Besides the aforementioned lion fight, Bond's introduction to Tracy has been amped up. Instead of following her car and then saving her from the water when she attempts to drown herself, he and she (in their separate cars) both end up in a breakneck car chase with some bad guys, and Bond spends much of that chase on the outside of Tracy's car. She then careens off the road, and he rescues her from a car accident rather than a suicide attempt. When 007 poses as Sir Hillary Bray at Piz Gloria, he dons a false beard. And the ending... I can't really tell exactly what's going on without being able to read the text, but whatever is happening is definitely not what happens in the book! (Or film.) However, it is very cool to see Bond's Bentley illustrated, and the ski chase and avalanche are appropriately spectacular. 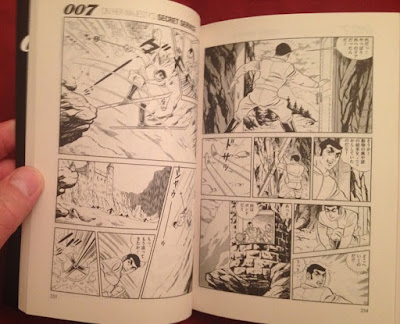 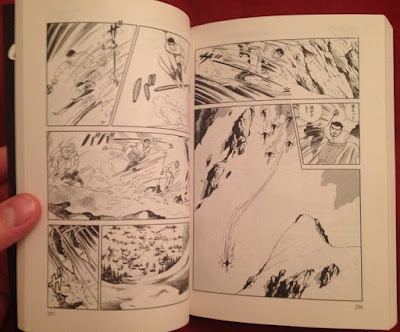 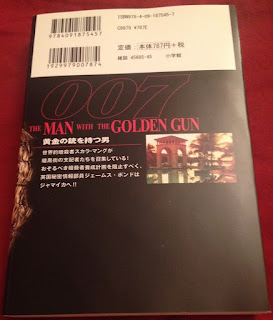 The Man With the Golden Gun appears to be the most divergent from its Fleming source. I was disappointed not to find the brainwashed Bond's assassination attempt on M—at least not occurring as it is described in the novel. Flipping through, it appears to be a largely original adventure. But then that's exactly the appeal of these adaptations. For faithful graphic retellings of Fleming's novels, we have the Daily Express strips as collected in several different formats by Titan. The manga stories, on the other hand, look as if they provide as much in the way of new Bond story material as old! Which makes me very much want to read them legitimately. I can only reiterate my plea for IFP and Dynamite to bring these books to English-speaking audiences as soon as possible. In the meantime, though, I recommend buying these fine Japanese editions for an extremely rare and extremely rewarding slice of hitherto obscure Bondiana.

Now if only someone would reprint those Sixties Man From U.N.C.L.E. manga...

*A note on the branding of these volumes: While Dynamite, whose license is with IFP and not Danjaq, seem to have been assiduously avoiding any logos associated with the film Bond, these editions, also copyright IFP, don't do the same. Obviously they are movie tie-ins as well, given the SPECTRE promotion on the outer mini-sleeves. But the title treatment of each story also recalls the title treatment of the film in question, and even the giant "007" is very much the (older style) movie logo, minus the gun barrel.
Posted by Tanner at 3:57 AM

Nice! Originally, this manga was written for low teenagers.