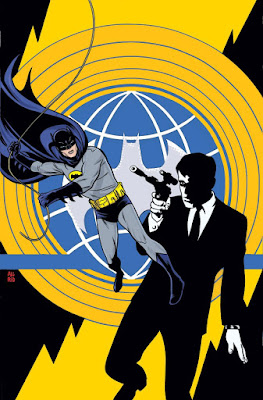 Newsarama reports that The Man From U.N.C.L.E. is returning to comics for the first time since the early 90s! Napoleon Solo and Illya Kuryakin will be teaming up with Batman (specifically Batman '66, which is how DC brands comics based on the Adam West TV incarnation of the character and set in the Sixties) in a 6-issue miniseries by Jeff Parker (The Interman, Agents of A.T.L.A.S.) and David Hahn debuting in December. From the description (and the awesome Mike Allred cover), it sure sounds like this is the classic TV version of The Man From U.N.C.L.E.:


Two 1960s television icons cross paths for a groovy, globe-spanning adventure in this one-of-a-kind miniseries. The deadly organization known as T.H.R.U.S.H. has a new twist in their plans for world conquest—they’re recruiting some of Gotham City’s most infamous villains! Agents Napoleon Solo and Illya Kuryakin bring this information to the one man who knows everything about these new enemies: Batman. Before you can say “Open channel D,” the Dynamic Duo and the Men from U.N.C.L.E. are jetting off to Europe to thwart the schemes of this deadly criminal cartel.

So does this mean that DC (a subsidiary of Warner Bros. Entertainment, who released this summer's excellent Man From U.N.C.L.E. movie) will be producing new Man From U.N.C.L.E. (ahem) solo books as well? I certainly hope so! Any such series would probably depend on sales of this crossover, but personally I'd love to see separate titles set in the film's continuity and that of the show.

It was announced at Comic-Con in July that Batman '66 would also be teaming up with The Avengers' Steed and Mrs. Peel in the near future. We haven't heard any more about that, so presumably the U.N.C.L.E. series will come first. But, man, what a comic book crossover that would be, if The Avengers met The Man From U.N.C.L.E.! I know, I know. I'm fully aware that it's Batman who's selling these books, not my spy heroes. Just indulge me that fantasy for one moment...

Batman '66 Meets The Man From U.N.C.L.E. #1 will be in comics shops on December 23, just in time for Christmas (and my birthday!) and will also be available with a 1 in 25 variant cover (not pictured) by Jose Luis Garcia-Lopez. So keep your eyes out, collectors!
Thanks to Jon for the tip!
Posted by Tanner at 3:16 PM

The third season of U.N.C.L.E. (1966-67) was almost as goofy and campy as the Batman TV show. The camp fad also influenced the other adventure series at the time: Voyage to the Bottom of the Sea, Lost In Space, Wild Wild West, and The (British) Avengers. They all went over the top in the 1966-67 season, then tried to tone it down in '67-68, when the camp fad was passing.

Unfortunately, DC recently announced that the Batman '66 comic has been cancelled. I don't know if that means that the Batman/U.N.C.L.E. crossover (and the Batman/Steed and Mrs. Peel team-up) will be called off as well.