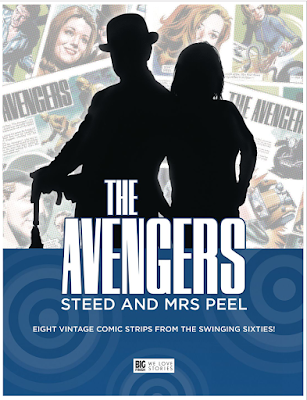 Ever since Big Finish first announced they'd be adapting the Sixties Avengers comics that ran in UK comics magazine Diana (no relation to Rigg), I've been looking forward to their promised trade paperback collection of those gorgeous original comics even more than the adaptations themselves. But it's been a long wait. On the Big Finish website, the collection is still available for pre-order and touted as "out in November..." yet there's very little of November left! (Volume 2 of the Steed and Emma audio dramas also has yet to materialize.) But it is coming. There are now pre-order listings on Amazon and Amazon UK as well, which both state a December 31, 2016 release date. Comixology has a digital version solicited for February 2017. But this snappy cover art would seem to indicate that the book is finally on its way to being a reality, whenever it actually materializes. The rather simplistic stories, intended for children and running just a scant six pages each (originally delivered in two-page installments), aren't very memorable, but Emilio Frejo's artwork is truly stunning, and I can't wait to have an archival collection of it for my bookshelf!

In addition to the 1966-67 comics themselves (listed under the titles Big Finish used for their audio versions), the 96-page trade paperback includes an introduction by Big Finish's David Richardson, interviews with actors Julian Wadham and Olivia Poulet (who voice Steed and Emma, respectively, in the audio adaptations), and an article entitled "From Strip to Script" by Kenny Smith, editor of Big Finish's magazine Vortex.

Read my reviews of two of these Diana comics ("Return to Castle De'ath" and "The Miser," as they're now known—though you won't find any reference to the fantastic Season 4 episode "Castle De'ath" in the strip itself; that connection was a stroke of genius on Big Finish's part for their expanded audio version) on the superb website The Avengers Illustrated.
Posted by Tanner at 1:50 AM

The book is now on sale from the Big Finish website only at £9.99 - Big Finish say it will be released to other outlets on 31 December, when they will put the price up to £12.99.