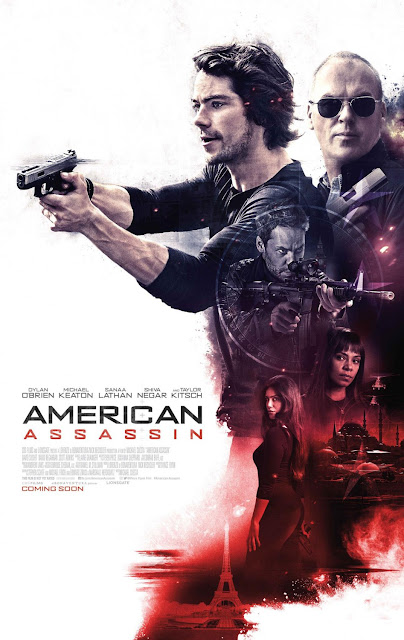 Lionsgate and CBS Films have released a new poster and two new trailers - one a restricted red band, the other approved for all audiences - for the first Mitch Rapp movie, American Assassin, which opens September 15 amidst a spy-packed month that also sees the releases of the Tom Cruise Iran-Contra movie American Made and Matthew Vaughn's eagerly anticipated sequel Kingsman: The Golden Circle.

Mitch Rapp has taken a long, winding road to get to the screen, and it's unfortunate that author Vince Flynn didn't live to see the results. (Though like Bourne and Bond, Rapp has outlived his creator with new books still being published by continuation authors.) First set up at CBS Films for producer Lorenzo Di Bonaventura way back in early 2008, actors like Gerrard Butler, Matthew Fox and Chris Hemsworth all at one time or another flirted with playing Flynn's counter-terror hero, and Bruce Willis was at one point up for the mentor role that eventually went to Michael Keaton. Legends' Jeffrey Nachmanoff and Legends of the Fall's Ed Zwick (who ultimately earned a writing credit on the final product) were both linked to direct at one time or another, before the job eventually went to Homeland veteran Michael Cuesta (Kill the Messenger), working from a script by The Americans' Stephen Schiff. Originally it was CBS Films' plan to adapt Flynn's 2005 novel Consent to Kill first. But at some point they shifted gears to tackle Flynn's prequel novel telling Rapp's origin story, and now American Assassin is a reality!