Rare Eurospy Movies Including OSS 117 on the Big Screen in Los Angeles This July! 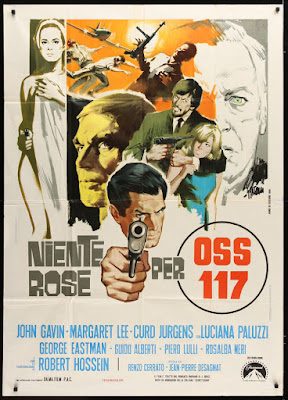 On July 26 and July 27, Quentin Tarantino's New Beverly Cinema in Los Angeles will screen two exceedingly rarely shown Eurospy movies, including a classic OSS 117 title! Better still, each will be presented in 35mm IB Technicolor prints! The night kicks off at 7:30pm with genre stalwarts Ray Danton, Margaret Lee, and the impossibly sexy Marisa Mell (Danger: Diabolik) in Secret Agent Super Dragon (1966). That's followed by 1968's OSS 117: Murder for Sale (aka OSS 117: Double Agent, aka No Roses for OSS 117), starring John Gavin (Psycho) as superspy Hubert Bonisseur de la Bath and co-starring Margaret Lee along with Bond luminaries Luciana Paluzzi (Thunderball) and Curd Jürgens (The Spy Who Loved Me). Gavin himself was of course briefly cast as 007 in Diamonds Are Forever, before Sean Connery agreed to return and Gavin was quietly paid a large sum to walk away. (It's okay. He went on to become U.S. Ambassador to Mexico.) Presumably that casting was partly because of his more than credible spy performance in this movie. I've said before that the five main OSS 117 movies from the Sixties are the cream of the crop when it comes to Eurospy cinema. Don't miss an extremely rare opportunity to see one in the cinema! Tickets for both nights' shows are available from Brown Paper Tickets, and cost just $8 (plus service fee) for both movies.

Both of these titles will probably sound familiar to comedy fans as well. Secret Agent Super Dragon made a memorable episode of Mystery Science Theater 3000 (but that should not dissuade viewers from giving it the benefit of the doubt on its own, as it is legitimately fun low-budget spy fare), and director Michel Hazanavicius revived the OSS 117 brand in 2005 as a very successful send-up of Sixties spy fare in two wildly popular French comedies. But great as those ones are (starring Jean Dujardin), the originals are absolute must-sees for any serious spy fan.