Trailer and Poster for Doug Liman's Iran-Contra Movie AMERICAN MADE 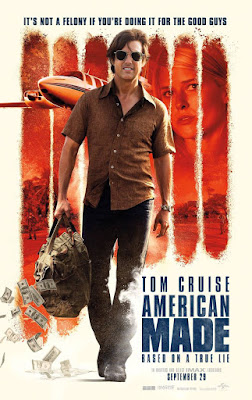 Universal has released the first trailer for the Doug Liman (The Bourne Identity, Fair Game)/Tom Cruise (Mission: Impossible - Rogue Nation, Knight and Day) reunion (following their successful sci-fi collaboration Edge of Tomorrow), the Iran-Contra story American Made. This is the one that we first heard about two years ago, when it was called Mena, in which Cruise plays the infamous CIA pilot Barry Seale. Seale ended up at the epicenter of an intricate conspiracy involving the Agency, the White House, the Medellin Cartel, the Nicaraguan factions the Sandinistas (the government) and the Contras, Manuel Noriega, Pablo Escobar, Vice President George Bush, Arkansas Governor Bill Clinton, and Oliver North, to name-check just a few strands of the web. Liman has a very personal connection to the material, as his father, Arthur Liman, was Chief Counsel in the Senate's investigation of the Iran-Contra Scandal and conducted the televised hearings that fascinated the nation in the summer of 1987 and made household names out of people like North and CIA Director William Casey. It's clear from the trailer that he has chosen to take a somewhat light-hearted approach to the subject matter (which makes sense when you focuse on someone involved at a ground-level, as opposed to North or Casey), possibly focusing more on the criminal aspects of Seale's career than the espionage aspects (not that there was any clear delineation between the two!). I can't wait to see the results!

Cruise will next be on screens in Universal's Mummy reboot, and is currently filming the next Mission: Impossible movie with returning director Christopher McQuarrie. American Made hits theaters September 29, coming in the same a spy-saturated month that also sees the releases of Kingsman: The Golden Circle and American Assassin.