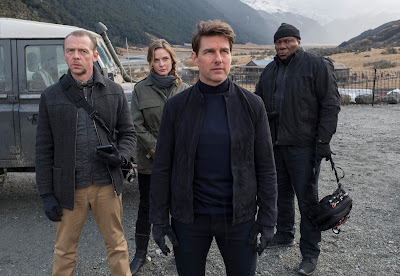 We've gotten a few paparazzi shots of filming in the streets of Paris and a bunch of great on-set portraits shot by the film's director, Christopher McQuarrie, via his Instagram feed. Now we have what I assume must be the first official still from Mission: Impossible 6, a great shot of the whole IMF team in costume and in character posted jointly on McQuarrie's Instragram and Tom Cruise's Facebook page. Maybe I'm reading too much into it, but I'm glad that the first official still is a team shot. Hopefully it portends that the sixth movie in the series will still be team-oriented, like Ghost Protocol and, to a slightly lesser extent, Rogue Nation (and of course like the TV show, most importantly), despite telling a more personal story for Ethan Hunt. The occasion for this photo's release is the crew's departure from New Zealand (which in the film doubles for Iraq at least part of the time), where they're pictured. They now head back to London for the final stretch of principal photography.
Thanks to Craig Arthur for the heads-up on this one!
Posted by Tanner at 12:11 AM