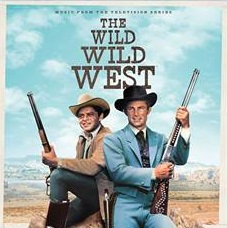 It was rumored earlier this year, but today La La Land Records officially announced on their Facebook page that they will release a 4-disc soundtrack for the classic Sixties spy Western The Wild Wild West on July 11! (Which makes this a very good summer for Wild Wild West fans, as the two TV reunion movies were just released on a standalone DVD for the first time a few weeks ago.) The set will be produced by Jon Burlingame, renowned not only for his immeasurable soundtrack knowledge at large, but particularly for his spy music expertise. Burlingame wrote the book The Music of James Bond and previously produced four excellent volumes of music from The Man From U.N.C.L.E. and the amazing 6-disc Mission: Impossible TV soundtrack. He also provided extensive liner notes for each of those releases, and this one will be no different, coming with a lengthy booklet.

According to a post from Burlingame, the set includes "excerpts from 26 scores representing all four seasons. Composers include Richard Markowitz, Robert Drasnin, Richard Shores, Dave Grusin, Fred Steiner, Harry Geller, Walter Scharf, Jack Pleis -- plus the never-before-heard Dimitri Tiomkin theme that was rejected early on." Burlingame asserts that there were three rejected Tiomkin themes (at least one a vocal), but it's unclear if all three will be included in the set or not. The tapes that made this release possible were found in an exhaustive two-year search of the UCLA Film and Television Archives, which also contained alternate, unused versions of Markowitz's iconic main theme. The set contains over an hour of music by Shores.

Limited to just 1,000 units, Music From the Television Series The Wild Wild West will be available to order from the La La Land website starting at noon Pacific on July 11.
Posted by Tanner at 11:10 PM