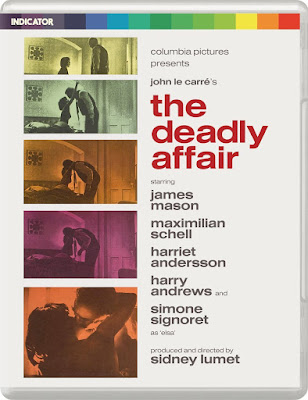 Amidst the flurry of John le Carré excitement surrounding the publication of the great author's new Smiley novel, A Legacy of Spies, an excellent new Blu-ray release of the film of his first book has gone somewhat overlooked. Sidney Lumet's The Deadly Affair (1966) was adapted from le Carré's debut novel Call for the Dead, and starred James Mason as the hero readers knew as George Smiley, here rechristened "Charles Dobbs" because Paramount owned the rights to Smiley following their film of The Spy Who Came in from the Cold the previous year (in which the character only had a small part). That film's screenwriter, Paul Dehn (who also adapted Goldfinger for the screen) also penned the script for The Deadly Affair... and actually managed to make a few improvements on the book! Mason is terrific as Dobbs, and sadly overlooked when we think of screen Smileys thanks to his more famous successors. In my opinion, The Deadly Affair is the most underrated of the films of le Carré's oeuvre. (Read my review of it here.) As such, its home video track record has been a bit spotty. For years it was available only as a rather unimpressive Region 2 DVD, and when it finally got Region 1 attention it was merely as a sparse, featureless MOD title from Sony's Columbia Screen Classics by Request. Now that oversight has finally been redressed, thanks to UK company Indicator, who have released a truly impressive, special feature-laden, region-free, limited edition Blu-ray/DVD combo! And the transfer is even more impressive than the supplements. This movie has never looked so good, and takes on a whole new life in Indicator's high-def remaster. Here's a rundown of the set's features: 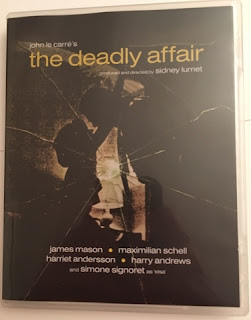 It also features a cool reversible cover with two choices of poster art and a choice of dark or light spines, either one of which will look good on the shelf next to your Criterion Spy Who Came in from the Cold Blu-ray. The Blu-ray world premiere of The Deadly Affair, a dual format edition, is strictly limited to 3,000 copies; any future pressings, should they happen, won't include the excellent 48-page booklet. (And trust me, you want this booklet!)

The features are excellent, though Kipen misspeaks a couple of times. After reiterating le Carré's claim from his interview on the Criterion Spy Who Came in from the Cold disc that screenwriter Dehn was an assassin for the SOE during WWII, he implies that le Carré trained under Dehn at Camp X with Ian Fleming and Christopher Lee. (Le Carré didn't sign up for spook school until well after the war.) And later he implies that Dehn wrote more than one of the early James Bond movies. It really should have been up to the producers of the special features to edit him better; I get the impression these are just conversational blunders and I suspect he instantly regretted them, as overall he comes across as quite knowledgeable. And despite those minor hiccups, it's great to finally have a documentary shining the spotlight on the underrated Dehn! I learned a lot from this piece, including the fascinating tidbit that Dehn's longtime partner was Hammer composer James Bernard. For some reason Kipen doesn't tell us why Smiley was changed to Dobbs, but this crucial bit of information is covered in depth on the commentary track. He does talk about some of Dehn's earlier, more obscure spy movies, which is great to see. West relates some very interesting anecdotes about cinematographer Freddie Young, and ably gives a great example of just what exactly camera operators and cinematographers do in the form of an amusing anecdote about shooting the scene in theater with Lynn Redgrave. Basically, all of the features are terrific, the transfer looks great, and this is a disc that all le Carré fans and all Sixties spy fans simply need! The region-free disc should be playable everywhere and can be ordered from Amazon.com or Amazon UK. (American consumers may find it works out in their favor to order from the UK.)

I would say that "The looking glass war" is an even more underrated adaptation..

Hm, I'll have to give that another watch. I first watched it right after I'd read the book and was pretty disappointed, mainly with the choice to make Leiser a young man instead of an old one. Though in his memoir, le Carre himself said that to him that decision made a lot of sense and he wished he'd written the book that way! That struck me as odd, because the whole theme of the book was the Department and its operators being stuck in the past, still fighting the last war, so an older WWII veteran seemed on point to me. But based on your opinion and JLC's, I shall definitely give it another go. If only someone would put out a beautiful Blu-ray version for me to do so on, that might cast the film in a new light, too!

I will say that I've always loved the opening of that movie, right down to the font used on screen. In fact I think it's one of the best openings of any Sixties spy films, and sets the perfect mood right from the get-go.