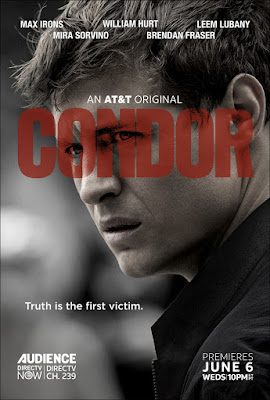 It was just over three years ago that we first heard Three Days of the Condor would be remade as a TV series. Last week AT&T's Audience Network released the first trailer for their upcoming series, Condor (a simplified title that, while lacking some coolness, conveniently avoids the potentially limiting question of a specified number of days altogether), a reimagining of one of the spy genre's cornerstone stories, based on James Grady's classic 1974 novel Six Days of the Condor and Sydney Pollack's iconic 1975 film of it, Three Days of the Condor. While the trailer doesn't look very familiar to fans of the movie or the novel, the description on the show's official website does:


Joe Turner has always been conflicted about his work for the CIA. But when something he’s discovered gets his entire office killed, leaving Joe as the only survivor and forcing him to go on the run, the theoretical reservations he’s always harbored turn into all-too-real moral dilemmas. Under life or death pressure, Joe will be forced to redefine who he is and what he’s capable of in order to discover who’s behind this far-reaching conspiracy, and stop them from completing their deadly objective that threatens the lives of millions. Inspired by Paramount’s Sydney Pollack 1975 political thriller Three Days of the Condor. Condor stars Max Irons, William Hurt, Leem Lubany, Mira Sorvino, Brendan Fraser, and Bob Balaban.

So, as we first learned a year ago, the series protagonist played by Max Irons (Crooked House) will be named Joe Turner, like Robert Redford's character in the film, and not Ronald Malcolm, as in the book. But the movie was close enough to its source material (despite a few key differences) that if the TV series is at all faithful to either, it should at least resemble both. Katherine Cunningham (The Playboy Club) takes on the Faye Dunaway role of Kathy Hale (again using the character's movie name rather than book name), and 20-year-old Israeli Arab actress Leem Lubany (Rock the Casbah) plays Gabrielle Joubert, a variation on the iconic role of the professional killer played so memorably by Max Von Sydow in the film.

When it was first announced, the project was described as a limited series (what we used to call miniseries). But that's changed, and now it's just referred to as a series. Should we get subsequent seasons, I would love to see them based on some of Grady's later Condor novels--especially the overlooked second one, Shadow of the Condor. I kind of doubt that will happen, but it would be cool.

My understanding is that the Audience Network was previously only available to DirecTV satellite subscribers, but now there is an app, DirecTV Now (similar to HBO Go, I think), that allows users to stream it on various set-top devices. I haven't done this myself, and can't vouch for it. But when Condor premieres this June, I will have to figure out how to see it, and this seems the easiest way.