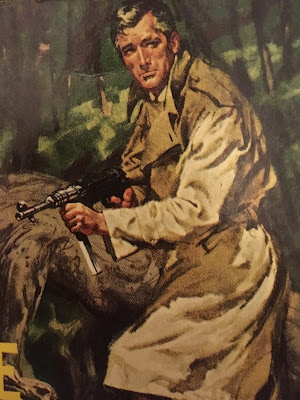 Paramount has been trying to make a new Matt Helm movie for nearly a decade, ever since the studio came away with the rights to the character in their split from DreamWorks in 2008. Prior to that, DreamWorks had been attempting a screen revival of Helm closer to Donald Hamilton's gritty novels than the spoofy Dean Martin movies ostensibly based on them in the Sixties. At various times director Robert Luketic, star Josh Duhamel, and writers Michael Brandt and Derek Haas had been attached. But Paramount started fresh. In 2009, Alex Kurtzman and Roberto Orci (Alias, Mission: Impossible III), riding high on the success of the Star Trek reboot they'd co-scripted, came aboard to produce the Helm film, with veteran screenwriter Paul Attanasio (The Sum of All Fears, The Good German) scripting. Orci and Kurtzman told me at the time that their goal was a tone somewhere between the Hamilton novels and the Dino movies, but leaning toward the former—serious, but also fun. A few months later came the big bombshell, when Variety reported that Steven Spielberg (Munich) was circling the project to direct. Spielberg had long harbored a desire to make a popcorn spy flick. (Having approached the Bond producers in the late Seventies and been crushingly denied the opportunity to direct 007, he jumped at the opportunity to helm a project his pal George Lucas had dreamed up that he claimed was "better than Bond"—a little movie called Raiders of the Lost Ark.) Sadly, by that August, his brief flirtation with directing Matt Helm was over. A few months later, Seabiscuit director Gary Ross (fresh off of scripting another big project that never came to be, the fourth Sam Raimi/Tobey Maguire Spider-man movie) was considered the front runner to direct Matt Helm, and for the first time Bradley Cooper (Alias) was mooted as the film's likely star. The script of note was still Attanasio's. But despite an apparently unanimous appreciation for that script, the movie, of course, never came to be. And the project seemed to go dormant.

Today, Deadline reports that Paramount is once again attempting to revive the franchise, this time with Tom Shepherd penning a new script. Shepherd is the writer of the forthcoming The Voyage of Doctor Dolittle, starring Robert Downey Jr. as the beloved Victorian vet of children's book fame, as well as an action-adventure spec script teaming a young Agatha Christie with Sir Arthur Conan Doyle to solve a baffling mystery, and a script about the real-life wartime espionage adventures of Roald Dahl and Ian Fleming. While the writer may be new, a lot of familiar faces are still attached in behind-the-scenes capacities. Bradley Cooper remains attached to star as Helm, and Kurtzman and Orci (though no longer business partners) remain attached as executive producers, now joined by Grant Heslov and George Clooney (who was, at one point, himself rumored for the lead role). Additionally, the trade tantalizingly (if nebulously) reports that, "Steven Spielberg is involved in some capacity." 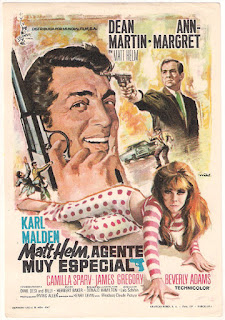 I've long since learned not to hold my breath on a new Matt Helm movie, but I'm still happy every time I read about movement on the project. Hamilton's 27 novels, beginning with 1960's Death of a Citizen, are largely secret cornerstones of the spy genre, and they deserve wider exposure and a faithful screen treatment. I admit that I'm a fan (to an extent, at least) of the quartet of Sixties Dean Martin pictures, but they're so far removed from Hamilton's wonderful books that they might as well bear no relation. I've often said that only one of them, Murderers' Row (co-starring Ann-Margaret and Karl Malden) even really qualifies as a movie. The others are bizarre assemblages of Sixties genre tropes like motorcycle chases, copious cocktail consumption, gratuitous zoom-ins on bikini-clad bottoms, and even, in the case of the first film, The Silencers, Martin singing. Plots are secondary at best, and non-existent at worst, and production values are generally low. Hamilton's novels, on the other hand, are terrific gritty, cynical, and brutal espionage stories on par with Ian Fleming and deserving of much wider recognition. It's possible that they've never gotten the credit they deserve outside of cult circles because they were published as paperback originals (excepting the 11th novel, The Menacers, which was the only one published in hardcover... but only in England), but that shouldn't be taken as a value judgment. They're fantastic, and like the spy fiction equivalent of the music of The Velvet Underground, hugely influential on the genre from Tom Clancy to 24 to Taken. Every spy fan should read them, and hopefully if a movie more faithful to the books ever gets made, the books themselves will become as widely known as they deserve to be.

By the way, while the series is probably best read in order, if you're looking to try just one Matt Helm book for a taste, I heartily recommend the sixth one, The Ambushers. Packed with sexy Soviet agents and nefarious neo-Nazis and rifles and missiles and even sword fights, it's quintessential spy fiction. And, if you're listening, Tom Shepherd... it would make a hell of a movie! Especially done as a period piece.
Posted by Tanner at 11:16 PM

A)Do these casting agents not have Jon Hamm's contact info? B)Where did you get the image for the article? C)RDJ as Dolittle? Was Johnny Depp not interested? Jesus Christ!

I think A and C stand better left rhetorical, but as for B, that's a detail from the cover of my own copy of the Gold Medal first edition of THE WRECKING CREW. (It's also been my Double O Section Twitter avatar for a while.) Those early firsts have my favorite Helm art! I wasn't a huge fan of the later uniform covers.

I'm a huge Bradley Cooper fan and it will be interesting to see him play Helm and if Spielberg helming the project, I'm eagerly awaiting for the film.