Trailer and Poster for Final Season of FX's THE AMERICANS 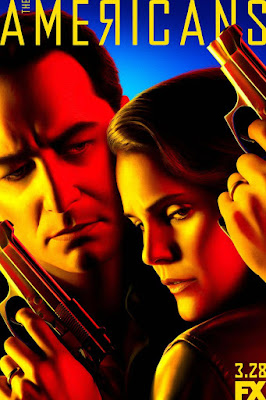 FX has released a trailer for the sixth and final season of The Americans, which premieres on March 28th at 10pm EST. They've also released a typically stunning poster promoting the season. This series about Russian KGB spies living undercover as "illegals" in 1980s America started strong and went from strength to strength. In a word, it's been utterly fantastic throughout its run. Although a period drama set during the waning days of the Cold War, it's also become surprisingly more topical in recent years. The original plan was to see Philip and Elizabeth Jennings (Matthew Rhys and Keri Russell) through the fall of the Berlin wall. Unless the final season spans multiple years, I don't see how they'll get to that point in history, but there are plenty of other burning questions to keep us on the edges of our seats until the finale. When I interviewed producer Graham Yost on the eve of The Americans' debut back in 2013, he concluded the session by quoting the FX Networks President. "John Landgraf said something that I thought perfectly sums it up: 'We know who won the Cold War. We don't know if Phillip and Elizabeth will survive. And that's the story. Will the marriage survive? Will the children survive?'" Five years later, we're on the verge of those answers. I can't wait to find out! Get a taste from the trailer below:

Read my 2013 review of The Americans pilot episode here.
Read my 2013 interview with executive producer Graham Yost here.
Posted by Tanner at 3:53 PM