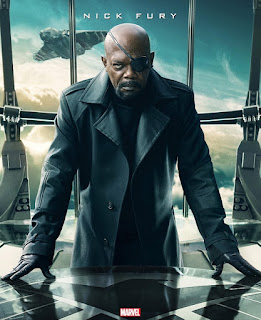 Hollywood Pipeline (via Dark Horizons) has snapped some pictures and even video of Samuel L. Jackson on the set of Marvel Studios' upcoming Captain Marvel. As previously reported, Captain Marvel (starring the studio's first female film title character) will take place in the 1990s, decades prior to other Marvel movies we've seen. (Though perhaps around the same time as the opening of Ant-Man, which featured aged versions of Agent Carter characters Peggy Carter and Howard Stark running S.H.I.E.L.D.) That means we'll get to see a younger version of Marvel's resident ramrod superspy, Nick Fury. (Read my Fury/S.H.I.E.L.D. primer here.) But he's still played by Jackson, who is expected to be digitally de-aged. (Clark Gregg's fan-favorite S.H.I.E.L.D. agent of big and small screen, Phil Coulson, will presumably get the same treatment.) The younger Fury will still have both eyes, thus won't sport his famous eyepatch look. Though, as we can see, Fury is in civilian clothes, indicating he's already traded his stripes for spy suits. We saw the original Nick Fury maintain this state (as a two-eyed spy) throughout an entire issue only once, in Fantastic Four #21 (which is collected in the S.H.I.E.L.D. Omnibus). Other than that, you could easily tell his soldier comics (Sgt. Fury and His Howling Commandos) apart from his spy comics (Nick Fury, Agent of S.H.I.E.L.D.) by counting his eyes. No doubt Jackson's Fury will lose an eye during his adventures in Captain Marvel. (In the comics, his missing eye has been explained several different times featuring several different circumstances.)

I have to admit, though, that I'm a little bit disappointed. I was hoping Marvel Studios would be cheeky enough to have Jackson replicate his most famous Nineties look, and sport Jules' Jheri curl from Pulp Fiction as the younger Fury!