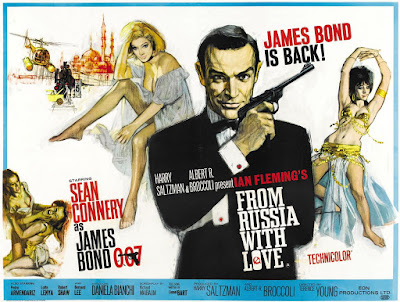 Hollywood's famed Egyptian Theatre will show 35mm prints of From Russia With Love and Goldfinger on June 17 - Father's Day. Bond on film has become a relatively rare commodity in recent years (even the once ubiquitous Goldfinger!), as most revival screenings nowadays tend to be projected digitally. Personally, I find that no matter how sharp the transfer, a DCP just doesn't feel like film... and I'd always rather watch a Bond flick on film. So if you feel like I do, and you'll be in the Southern California area mid-June, you should definitely go! The double feature kicks off at 7:30, starting with From Russia With Love. Tickets ($12 covers both films) are available through Fandango, or at the Egyptian Theatre box office.
Posted by Tanner at 2:05 AM

I am not sure if you have heard about this...

More BOND on the BIG screen in Los Angeles this summer!

I will be in LA from mid-June to early July. Hopefully I will run in to you at one of the screenings. Hope all is well with you, my friend!