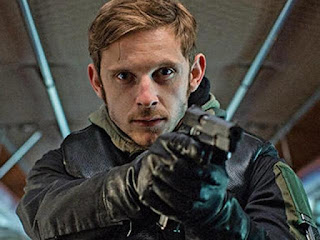 Funny, but I've always felt that Dafoe was wrongly cast as John Clark. If anything, based on the books and his very name (bland, common, etc), it seems to me that Henry Czerny fit the physical description of Clark a little better. If he were about twenty pounds lighter. Czerny looked the way I thought Clark should look; unmemorable, no distinguishing features, hard to describe to the authorities.
Mind you, I have "Rainbow Six", but have yet to read it. Could be that I'll change my mind once I have.
Michael B. Jordan sounds like a nice twist, especially if they're going with the ex-Special Forces angle.

Oh, and check the comments section of your "No Time To Die" post up above. Some jerk has been naughty.

Based on Clancy's description of the character, I always felt that Henry Czerny himself was a better physical fit, even though he may have been 10 or 20 pounds out of shape for a CIA operative. However, had the right look; unmemorable, bland, and difficult to describe to the authorities. Dafoe was good, but seemed miscast.
Michael B. Jordan will be a nice twist on the character.

Oh, and I think somebody's been naughty in the comments section of your "No Time to Die" post up above.

Dammit, please delete one of my comments. I didn't read the fine print about owner approval.
In my own defence, I'm a little tired right now. ;-)

I don't know what's been going on with the comments, Teeritz. I've just discovered that a bunch of your very legit ones were caught in a spam folder (and released them) while those trollish ones you mention had not been caught! (I think I've found and deleted all those now.) I'm supposed to receive email alerts for all comments (needing moderation or otherwise, but that hasn't been happening. I'm sorry that a lot of yours hadn't gotten through. Now that I know this is happening, I'll stay on top of it more.

Hm, interesting idea about Czerny! I really do like him in the role he does play though. I didn't like Dafoe at the time the movie came out. He wasn't how I pictured Clark at all. But now I really appreciate him in that part. I'm keen to see what Jordan does with it though!