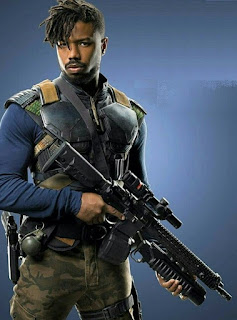 Deadline reports that Sicario: Day of the Soldado director Stefano Sollima is in talks to direct Michael B. Jordan in Paramount's next Tom Clancy movie, Without Remorse.

Clark, who became known as "Jack Ryan's dark side," was first introduced in Clancy's third Ryan novel, The Cardinal of the Kremlin in 1987, but retconned in Clear and Present Danger (when field man Clark and analyst Ryan finally meet face to face) to have also played an important role in the events of Patriot Games. He went on to take center stage in the Clancy novels Without Remorse (which goes back to Vietnam) and Rainbow Six. Clark is a former Navy Seal and off-books CIA field operator. In the films, he's been played by Willem Dafoe (in Clear and Present Danger opposite Harrison Ford as Ryan) and Liev Schrieber (in The Sum of All Fears opposite Ben Affleck).

Paramount hopes, of course, to launch a franchise. The plan is to start with Without Remorse, then do Rainbow Six. This is the reason that Clark has, sadly, not appeared on Amazon's TV show Tom Clancy's Jack Ryan. Because the studio was planning a film, they didn't allow the show's producers to use Clark. That's really too bad, as both characters work better together. In the books, they compliment each other, as Ryan is frequently deskbound, and Clark is always up to his neck in action. There was a plan a few years ago to (re-)introduce Clark and Ryan individually in two feature films, Without Remorse and Jack Ryan: Shadow Recruit, respectively, with This Means War co-stars Tom Hardy and Chris Pine playing Clark and Ryan (again, respectively), then team them up, Marvel-style, in a third film. (At that point Mission: Impossible - Fallout director Christopher McQuarrie was attached to Without Remorse.) Sadly, Shadow Recruit bombed and those plans never came to fruition. (Hardy has also been linked to another Clancy franchise, Splinter Cell.)

Italian director Sollima, who first achieved international acclaim for his mob drama Gomorra, is a good choice to launch a potential Clancy franchise. His Sicario sequel was more than a tad Clancy-esque, playing at first like an unofficial adaptation of Clear and Present Danger before going a different direction in its second half. Sollima did a good job blending compelling characterizations with military hardware fetishism, a crucial skill set for tackling Clancy material. Akiva Goldsman (A Beautiful Mind) will produce alongside Jordan and screenwriting duo Josh Appelbaum and André Nemec (Alias, Mission: Impossible - Ghost Protocol).

It's unclear whether Sollima's Without Remorse will be a Vietnam-era period piece like the book (which would be fantastic!), or updated to a contemporary setting. Sadly, I suspect the latter. (Though if I were the president of Paramount, I would seriously consider the franchise prospects of a historical setting, which could ultimately follow Clark through three decades of CIA covert actions across multiple films....)
Posted by Tanner at 4:13 PM

Without Remorse is one of my favorite Clancy novels. I'd love to see that finally make it to the big screen!