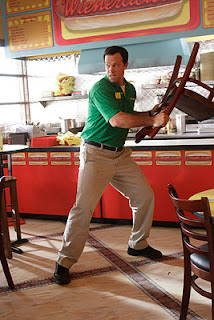 I thought the second episode of Chuck was much better than the first. The show is a lot more comfortable in its own skin now; it’s a spy comedy, and it’s happy to stay that way. Episode 2 was definitely funnier than the pilot, but still action-packed. It’s a good blend.

The supporting cast is also starting to gel better. Chuck’s odd family unit comes together well in the second episode (very reminiscent of the Cohens in co-creator Josh Schwartz’s The O.C.), and we get a better sense of his sister Ellie’s personality. It’s interesting to see how all the outsiders fit into their group, too. Best friend Morgan still annoys us almost as much as he annoys Ellie, but at least he’s settling down. The two special agents protecting (or trying to kill, depending on the orders of the day) Chuck each manage to worm their way into the family too, with varying results. I like the relationship that’s developing between Chuck and CIA agent Sarah, and she’s developing enough of a clear character that actress Yvonne Strzechowski manages to overcome those generic qualities I mentioned in my first review of the pilot. Her antagonistic relationship with the show’s breakout, scene-stealing star, Adam Baldwin (NSA Agent Casey), is probably the best one going so far. All of their moments together were great, and Baldwin got a lot of humor out of his new cover job at the Buy More where Chuck works. Let’s just say you don’t want to shoplift at that particular Buy More. The whole setup turns out to have been a means of getting three spies (two of them professional, one a total outsider) working together at a mini mall, which is a great idea. I can’t think of many missions that would have mandated such humorous covers. By working these schlub jobs, the super-agents are now regular people like us viewers, and it makes them easier to relate to. 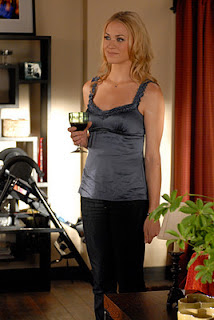 The villain wasn’t much to speak of this week, but he was pretty tangential to the story anyway. This episode was about building character relationships, and he was just a means to that end. (And also served to conveniently explain away any hopes Chuck might have of getting rid of all the secret information now embedded in his brain.) I liked the choice of Iggy Pop’s "Lust For Life" as a theme song (although it seems like the opening music may change each week), and I liked that Chuck has access to ABC secrets in that billion dollar brain of his, not just NBC! (He knows what really happened to Oceanic Flight 815!) Chuck is an entertaining show, and I’m still sticking with it.

The third episode airs tonight at 8 on NBC. You can catch up on episodes you missed by watching them online at NBC.com.
Posted by Tanner at 1:33 AM

All through the last episode (3), all that went through my head was. Adam Baldwin is pretty much playing a Matt Helm type. Or maybe it's because I was in he middle of reading The Ambushers.