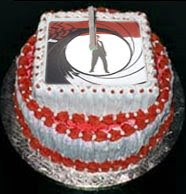 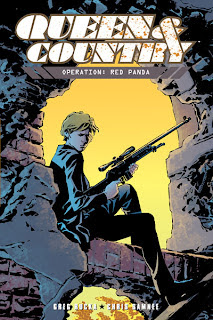 A year ago I was excited because issue 31 of Rucka’s phenomenal spy comic book Queen & Country (which at the time I called "the best current, ongoing spy saga in any medium") had just come out after a long delay. I’m sorry to report that since then, only one additional issue has materialized, part three of a four part storyline. That story, "Operation Red Panda," is set to be collected this month, so hopefully that means that the final issue, #33, will be on shelves before that time. As much as I love the series, I’ve actually given up on reading the individual issues because so much time goes by between them that I forget the whole plot up until that point. (They’re often pretty complex plots, too.) So I am looking forward to reading "Operation Red Panda" in its entirety this winter, but sadly don’t foresee any additional Q&C stories for quite some time. Rucka has given some fairly credible reasons for wanting to hold off before the next arc, but the fan in me really can’t wait. Hopefully we’ll at least see Queen & Country heroine Tara Chace in another novel before the next comic appears! In the meantime, Rucka’s slate is pretty full. In addition to writing scads of comics for DC (including the espionage-themed CheckMate which simply requires too much knowledge of the DC universe for me to follow, as much as I’d like to), he’s got another series on tap for Q&C publisher Oni Press called Stumptown. Although he describes it as taking place in the same world as Queen & Country (which is intriguing), he’s switching genres (and continents) on us. Stumptown is an American private detective series which the author describes as being "about as realistic as most private eye stories are going to be, which is to say not at all. Because, frankly, actual investigation work is pretty tedious and undramatic." Just as he’s frequently admitted to (very successfully) modeling Queen & Country on the sublime spy TV series Sandbaggers, Rucka cites The Rockford Files and one of my all-time favorites, Magnum PI, as being the primary influences on Stumptown. I’m sure it will be a great comic book and I look forward to it, but all the while I’ll be yearning for Q&C.
One thing that won't fill that void is the movie of Rucka's graphic novel Whiteout, due in theaters next year. Tara Chace (or Lilly Sharpe as she was known back then) has been cut out of the film version, replaced by a male character. Rucka assured audiences at last summer's San Diego Comic-Con that the movie would still retain an espionage element (personified by this new, male character), and argued that the change better served the plot by making main character Carrie Stetko (Kate Beckinsale) the only woman in the all-male world of Antarctica.
Luckily, Oni isn’t leaving Tara Chace out in the cold. They’re replacing the old trade paperback collections with new, longer compendiums of three or four stories per single, affordable volume, as opposed to just one. These new "Definitive Editions" will be a great opportunity for spy fans who haven’t yet done so to discover the amazing world of Queen & Country!
Posted by Tanner at 7:15 PM