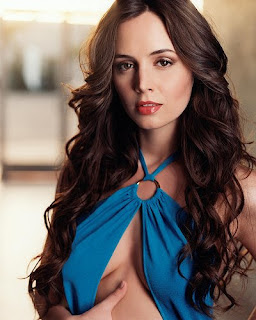 Tradecraft: New Joss Whedon Spy Show!
Just before the writers' strike was called, Fox made public a deal with Buffy the Vampire Slayer mastermind Joss Whedon for a new TV series called The Dollhouse. The Dollhouse stars Buffy alum Eliza Dushku as one of a small group of secret agents who are reprogrammed for each assignment with different memories, abilities and an entirely new personality. "After each assignment," says Variety, "...the characters have their memories wiped clean, and are sent back to a lab (dubbed the 'Dollhouse'). Show centers on Dushku's character, Echo, as she slowly begins to develop some self-awareness, which impacts her missions." The network has given the series a seven episode commitment. I'm a huge fan of Whedon's previous work, and can't wait to see him turn his attention to the (sort of) spy genre! I just hope the strike doesn't seriously impact plans for this show.

Casino Royale 40th Anniversary DVD NOT Out Next Week
Despite some recent excitement over an updated Amazon listing with a November 8, 2007 release date for Fox/MGM's upcoming Casino Royale 40th Anniversary Edition DVD, I'm sorry to report that a Fox spokesman has confirmed that the title is definitely delayed until next year (when it will no longer be the 40th anniversary of the Peter Sellers/David Niven/Woody Allen spoof). My contact didn't provide any details as to why, but it's easy to speculate. Perhaps EON Productions, who've long made clear their desire to have no association between their legitimate series of James Bond movies and those red-headed stepchildren, Casino Royale ('67) and Never Say Never Again, requested that Fox not release the title to coincide with the release of their James Bond Ultimate Collector's Set this Tuesday.

Kaleidoscope Soundtrack Issued On CD
Speaking of Casino Royale, the '67 all-star spoof wasn't the only movie of its time to loosely borrow a plot from Ian Fleming's novel of that name! The 1966 Warren Beatty vehicle Kaleidoscope also takes the book's central device of British Intelligence sending a man in to bankrupt an enemy by beating him at cards... and plays it straighter than the Sellers version. Kaleidoscope is quite a fun little Swinging Sixties spy movie, co-starring Susannah York and the great spy character actor Clive Revill (Fathom, Modesty Blaise). Memorable Prisoner Number 2 Eric Porter plays the Le Chiffre role. It's certainly essential viewing for Ian Fleming fans for its unauthorized use of his famous plot, which was close enough to warrant coverage in the first published study of the Bond films, John Brosnan's James Bond in the Cinema. Unfortunately, I'm not mentioning all this because the movie is coming out on DVD (although it really should, WB!), but at least its soundtrack is officially available. The score by Stanley Myers, who also composed the music for another great Swinging London spy movie, Otley, is a fantastic fusion of Barry and Bacharach sounds, ideal Sixties spy/caper music. FSM recently 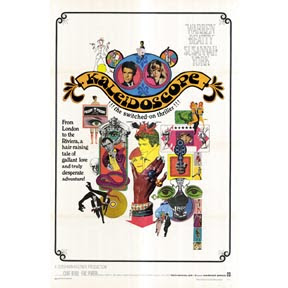 released it on CD paired with Johnny Keating's music for Hotel. (I'm unfamiliar with that movie, although it starred The Liquidator himself, Rod Taylor.) I burnt my LP of the score onto CD a while ago and have listened to it often enough that I'm certainly eager to upgrade! It's good background sound when you're in a mod spy mood.
Posted by Tanner at 3:22 AM

Hi,
just for your and everybody else's information: Kaleidoscope has been officially released on dvd in Germany, as Der Gentleman-Zinker. Nice widescreen print, and with english audio too. Readily available for example at amazon.de, and at very affordable price.

By the way, you have a great blog!

Thanks for that news, Ari-Pekka! That's great to know. And I had no idea. If the dollar ever gets a little stronger again, I'll definitely have to order that from amazon.de. I love this movie.