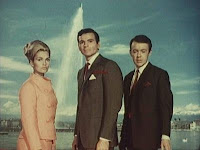 Variety reports some extremely unexpected, out of the blue - and fantastic! - spy news today: Hellboy director Guillermo del Toro will write and direct a big screen version of the classic Sixties ITC series The Champions for United Artists. The Champions is a terrific (if dated) lesser-known show from the ITC stables that ran from 1968-69 and starred Stuart Damon, William Gaunt and the stunningly beautiful Alexandra Bastedo (The Blood-Spattered Bride). They played secret agents whose plane crashed in the Himalayas, only to be rescued by an advanced civilization who not only healed them but imbued them with super powers. The trio worked for NEMESIS, an elite intelligence unit of the United Nations based in Geneva. They had to keep their powers a secret from everyone, from rival agents and organizations and even from their own boss. Del Toro has traditionally made only horror movies (and once said he had no interest in venturing outside of that genre), including the Oscar-nominated Pan's Labyrinth last year. The fantastic element of The Champions probably appeals to him, and it's great to see him lured into the secret agent genre! Among his horror movies is Blade II, in which he demonstrated a true gift for action scenes. Hellboy successfully blended that talent with the rich characterizations characteristic of his Spanish language work. Hopefully The Champions will provide another such opportunity.
The first half of The Champions' only season (it ran for thirty episodes) is available on DVD in the US from A&E, but it's been available for years and there's still no sign of Volume 2. (Maybe the movie will prove the impetus for them to release the rest, but that's still years away.) In England, Network DVD released the whole series in a lavish special edition complete with actor interviews, commentaries, the Legend of the Champions TV movie which was cobbled out of existing episodes in the early '80s, and a new documentary. The Champions is one of the shows covered in James Chapman's excellent book Saints and Avengers: British Adventure Series of the 1960s.
Posted by Tanner at 11:08 AM