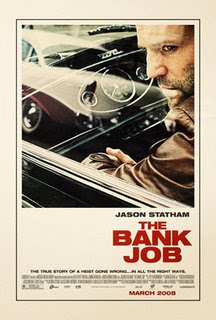 When I first reported on The Bank Job, I didn’t even realize that it was a spy movie. But it is, through and through. Moreso, even, than it is a heist movie, really.
The Bank Job is a conspiracy thriller that follows a number of different plot threads all revolving around the real, unsolved 1970 robbery of a Lloyds Bank on Baker Street. Several days after the robbery, the British government issued a "D Notice" - an official request for a media blackout - and the press ceased all coverage. That much is known, as are several other facts, which we get in text form at the end of the movie. The film itself is writers Dick Clement and Ian Lafrenais’ extrapolation on those facts, supposedly constructed with the aid of a "Deep Throat" type informant who played a part in the government cover-up. It’s impossible for a viewer to guess how much is true, but for spy fans or conspiracy buffs, the events they propose are certainly entertaining.
MI-5 want to put a gangster masquerading as a black activist named Michael X behind bars. Unfortunately, Michael X is in possession of some compromising photographs of Princess Margaret, which the Royal Family can’t afford to get out. MI-5 boss Miles Urquhart (played by Sixties spy veteran Peter Bowles) knows the photos are kept in a safety deposit box at the Baker Street branch of Lloyd’s Bank, but doesn’t have the authority to send an official team in to get it. Tim Everett (Richard Lintern), a sort of sleazy James Bond (prone to hanging around the Players’ Club in evening attire even though changing fashions no longer dictate such formalities), formulates his own plan for getting the photos. He sets up a model he’s sleeping with named Martine Love (Saffron Burrows) on drug charges, so that she’ll have to come to him to get her off. When she does, the deal he offers is that she walks away if she can recruit some of her friends (she grew up with a lot of villains, we’re told) to knock off the bank, and get the photos for him. Martine goes to her oldest pal (and unrequited love) Terry Leather (Transporter Jason Statham), who’s now married (to MI-5's Keeley Hawes) and trying to make an honest living with a garage. Tempted by a way out of debt to mobsters, he convinces his crew of amateurs to have a go at the bank, which Martine assures him will have its alarms turned off, while failing to fill him in on the photograph or her own little side deal. Tim now has his bank robbery, safely removed from MI-5 by two degrees. What he doesn’t know, though, is that sleazy porn king Lew Vogel (David Suchet), who has ties to Michael X, also stores his blackmail pictures in the bank, which includes a number of government officials in incredibly compromising positions.

All that, mind you, is just the set-up. The heist itself falls about halfway through the film, and then the proverbial shit hits the fan, as the bank job affects the various parties, conspiracies become unraveled, honest and crooked cops complicate things further, and MI-5 loses control of its illegal operation. Unfortunately, this complicated scenario (along with the genre twist from heist flick to conspiracy thriller, and an accompanying darkening in tone) throws off the movie’s pacing and makes it seem a little long in the middle. Luckily, the best is yet to come (especially for spy buffs), and things really pick up in the second half. The planning and the aftermath almost seem like two separate films, but luckily (even though the transition is a little shaky), I thoroughly enjoyed both of them. 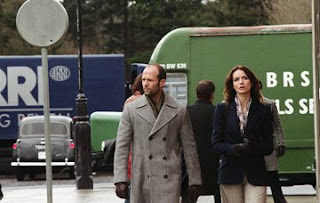 I’ve mentioned before how much a movie’s setting can affect my enjoyment of it, and that applies to time as well as place. I love The Bank Job’s Swinging London setting, and the cars, clothes, haircuts and music that go with it. Prolific writers Clement and Lafrenais certainly know that era well, having lived through it (I believe one of them shared a flat with either Michael Caine or Tom Courtenay) and written some of the very best movies that came out of it, particularly in the heist and spy genres. The duo penned two incredibly fun contemporary time capsules of Swinging London, the caper movie The Jokers with Oliver Reed and Michael Crawford, and the spy farce Otley (one of my very favorite spy movies, in fact!) starring Courtenay. History has since provided the writers with a darker glass to view the era through, though, and The Bank Job reflects that. While it shares the anarchic, anti-establishment spirit of Otley and The Jokers, it’s less gleeful and more jaded... and considerably more violent, in a few scenes. Rather than the James Bond-meets-The Italian Job spy/heist hybrid these writers might have given us in the Sixties, what we get instead is more of a George Smiley-meets-The Killing job. And that’s not at all a bad thing!

The Bank Job may not be "fun" in the same lighter-than-air way that The Jokers is, but its labyrinthine web of conspiracies and counter-conspiracies is still fun in the sense that it will entertain the hell out of anyone with a love for twist-filled spy yarns, British gangster films, Royal scandal, real-life mysteries or Swinging London in general. Despite its pacing issues, director Roger Donaldson wraps everything up in an aesthetically-pleasing package, and a cast of recognizable British character actors (including Bond veteran Colin Salmon in addition to all the other aforementioned familiar spy faces) give uniformly solid performances. If you’re reading this blog, chances are you’ll enjoy this movie.
Posted by Tanner at 1:57 AM

Great blog post. A friend of mine saw this film and he really enjoyed it. He definitely recommended it to me. I'm a fan of Jason Statham. I'm also a fan of this time period in London and all that goes with it. I hope to see this one.

I was reading this blog, and no I didn't enjoy it. lol