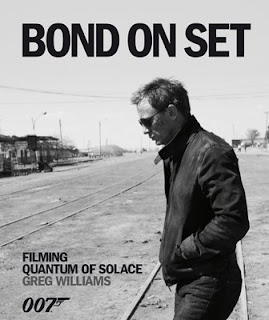 Bond On Set: Filming Quantum of Solace is Greg Williams’ third "Bond On Set" photography book. He started with Pierce Brosnan’s final 007 outing, Die Another Day, for which he produced a rather haphazardly-assembled collection of candid photographs of the actors and crew on set. (Flipping through it six years later, in fact, it’s easy to forget that the movie is a dud. In still images, it looks fantastic!) Williams is definitely a gifted still photographer, and has a knack for capturing little moments that tell big stories about day-to-day life on a film set. He’s also good at capturing quintessentially Bondian moments (often involving guns or beautiful women), a talent which has earned him the poster shoots for both of Daniel Craig’s Bond movies to date. The best pictures come from subtle juxtapositions of the two: Brosnan or Craig in full Bond attire, but relaxing between takes; Halle Berry pointing a pistol at someone, but smiling broadly at an off-camera joke instead of looking serious; or Eva Green looking gorgeous in one of her Vesper dresses, but instead of posing like a model, clowning for the photographer, throwing punches at the camera.

The Casino Royale book was better organized, generally progressing chronologically through sets and locations in the order they appeared in the movie. Daniel Craig himself provided some insightful and sometimes humorous recollections on the individual stills in a dialogue with Williams at the end of the book. Bond On Set: Filming Quantum of Solace is the best organized book yet in the series, laying out the photos behind chapter headings beginning with "Pre-Production" and continuing with pictures grouped by shooting location. Again, it’s an assortment of color and black and white images, every one of them pretty outstanding. Whereas the first two volumes were very heavy on the candids, there’s a lot more portraiture this time, but even posing his subjects are clearly relaxed and at ease with Williams’ presence. There is sadly no dialogue with Craig this time out, but instead Marc Forster provides some lengthy bursts of commentary throughout the book.

As you might imagine in a making-of photo book of this nature, spoilers abound, so even if you pick it up today, I’d recommend waiting until you’ve seen the movie to really dig into it. The spoiler shots include some very striking photos of one of the film’s female stars (sans costume–at least in the traditional sense) that have already appeared on the Internet. Every male fan will definitely want to at least flip to these pages once he’s seen the movie! In the meantime, you can pretty safely flip through the first chapter or two without ruining much. Enticingly, you’ll get a glimpse in the first couple of pages of how Daniel Craig will look in his first official gun barrel firing pose (since Casino Royale’s variation on that was incorporated into the action). 007's till firing one-handed as opposed to two (in the last volume, Craig discussed how real life law enforcement personnel always use two hands), but in a much more military looking pose than some of the previous Bond actors. (I have to say, inaccurate though it may be, I still think Dalton and Moore created the best silhouettes, with their guns aimed high and their other hands swung out far to the side.) You’ll also see Craig putting the Aston Martin DBS through its paces on a test track in preparation for filming the film’s chase scene, which is pretty neat. 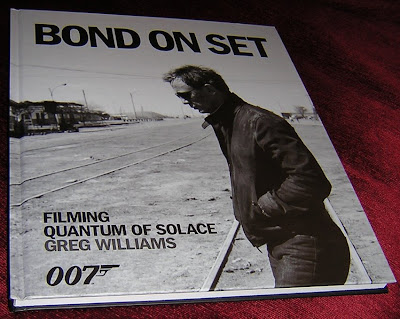 Regular readers will be familiar with my occasional "Judging a Book by Its Cover" reviews, in which I rate books based solely on their physical attributes. Well, for a photography book, wherein you pretty much know what you’ll find inside, and enjoyment thereof is entirely subjective, that’s a big part of what a reviewer can offer, so I’ll lump it right in with the regular review.

Collectors who seek uniformity in their series will not like the "Bond On Set" designs. The only constant among the three volumes is that each one is completely different from the others. The first "Bond On Set" book (published in hardcover by Boxtree) was under a foot in height, and about nine inches across. The second volume, from DK, jumped to just over twelve inches tall, and almost as many wide. This one retains that height, but drops down to ten inches in width.

Both previous volumes featured dust jackets and boards that bore the same images as the jackets. This one eschews the jacket altogether, with winning results. As a collector, I’ve been conditioned from my earliest days scouring used bookstores for Fleming firsts to value a dust jacket above all else, and in many cases, that’s appropriate. But with illustrated boards, it’s simply not necessary–and sometimes gets in the way. From a purely tactile standpoint, DK has fashioned the most satisfying of all three books in Bond On Set: Filming Quantum of Solace. The matte finished boards, bearing a terrific, moody, black and white photograph of Daniel Craig near some railroad tracks, don’t need a dust jacket. They’re much handsomer without one, and I like the way the bare book feels in my hands. It’s uncomplicated. It’s a hefty slab of Bond photos, and that’s exactly what I want from it. Furthermore, it has sharp, well-defined corners and a totally flat spine, which works excellently for an un-jacketed book. Bond On Set: Casino Royale had this too, but you couldn’t tell because of the dust jacket. My first reaction to a book is always based on how it feels when I hold it, and I very much like the way this one feels in my hands. At 160 pages (slightly longer than the previous two) and with thick, solid boards and glossy, heavy stock pages, it’s got a satisfying weight to it. To put it in terms Jason Bourne could appreciate, you’d certainly get a reaction if you hit someone over the head with this book. Despite all that, DK has managed to keep the price point down to a very reasonable $22.00, which is considerably cheaper than previous volumes. It’s a lot of value for your dollar. 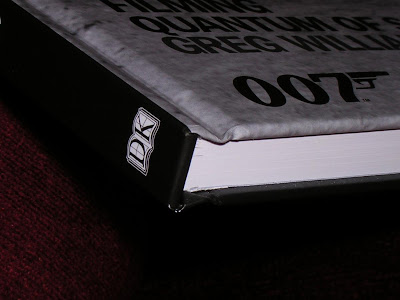 I still miss the in-depth, text-heavy making-of books we used to get for Bond films like GoldenEye and Tomorrow Never Dies, but to be honest, Williams’ photo books tell the behind-the-scenes story nearly as well. You certainly get a sense of being on set, and he captures all aspects of the filmmaking. You see hard work and fatigue, and you see moments of levity. You see the production process from start to finish. In fact, the still images sometimes manage to tell more in that single, captured moment than a whole DVD making-of featurette. Like its predecessors, Bond On Set: Filming Quantum of Solace is essential reading (if that’s the word) for James Bond fans–and a nicer coffee table item than either of those ones.

Email ThisBlogThis!Share to TwitterShare to FacebookShare to Pinterest
Labels: Art, Books, Judging a Book by its Cover, Quantum of Solace, Reviews