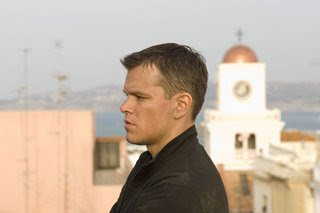 Variety reports that Universal has tapped George Nolfi to write the untitled fourth Jason Bourne film. Nolfi co-wrote The Bourne Ultimatum with Scott Z. Burns and Tony Gilroy, from a story by Gilroy. "Though the series is based on the Robert Ludlum novels, the new film won't be based on a Ludlum title, but rather an original story," says the trade. That's hardly surprising, since the last two weren't even based on the Ludlum novels from which they took their titles! As previously reported, Frank Marshall, Paul Greengrass and Matt Damon all reprise their respective Ultimatum positions of producer, director and star. Variety succinctly summarizes the studio's motives by saying, "The studio intended to stop at the third installment, but the film grossed $227 million domestically and $215 million overseas." Whatever their reasons, if they can reproduce the same level of excellence as Ultimatum, then I'm all for it!
Posted by Tanner at 11:52 PM