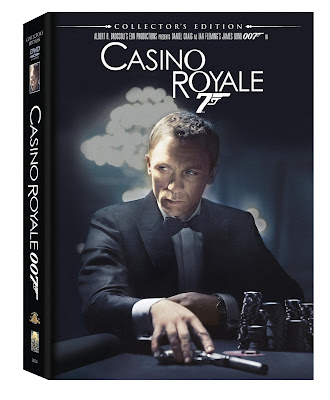 Well, this is it, spy fans. This is the week you empty your wallets. This is a huge week for spy DVDs!
Casino Royale (2006): 3-Disc Collector's Edition and Blu-Ray
In a week filled with great releases, this is the real prize. Anyone disappointed in the rather threadbare two-disc special edition of Casino Royale put out by Sony back in 2007 will be more than placated by this fantastic three-disc version (also available on Blu-Ray), brimming with extras, that really earns its special edition status! In addition to all the features included on the initial release, this collector's edition also includes scores of all-new documentaries produced by John Cork, one of the men behind the wonderful documentaries on all the classic Bond DVDs and more. Cork has promised documentaries that go beyond Casino Royale alone into the wider Bond mythos, and told me that every one of them will feature information that even the most die-hard Bond fan has not heard before. Highlights among these tantalising documentaries are:
o Ian Fleming’s Incredible Creation – A remarkable look at the birth and continued success of James Bond, including never-before-revealed information about Bond’s creator and the origins of 007.
o The Road to Casino Royale – The story of why it took over 50 years for the Bond filmmakers to bring Ian Fleming’s first 007 novel to the big screen, featuring the amazing behind-the-scenes stories of the many attempts to make the film.
o James Bond in the Bahamas – A fascinating examination of the links between the the cinematic Bond and the Bahamas, with never-before-told behind-the-scenes stories from Casino Royale, Goldfinger, Thunderball, You Only Live Twice, For Your Eyes Only and The World Is Not Enough.
o Ian Fleming: The Secret Road to Paradise – A revealing exploration of the world of James Bond’s creator. In this documentary, discover why Ian Fleming was drawn to the Bahamas , and learn the cinematic Casino Royale’s unique link to an important chapter in 007’s secret history.
The press release promises that even the "Filmmaker Profiles" (usually the boring, texty part of a DVD menu) will include "in-depth conversations" and "never-before-seen footage!" Showcased are director Martin Campbell, Director of Photography Phil Meheux, Stunt Coordinator Gary Powell, composer David Arnold and others.
Fans complained that the original release neglected deleted scenes; that's made up for here with "Rescue & Recovery,” "Squandering Government Funds," "Cricket Pavilion," and "Gettler Raises Bond’s Suspicions."
Beyond that, you also get storyboard sequences, storyboard-to-screen comparisons, Chris Cornell's music video and a commentary with Martin Campbell and other key creative talent. The Blu-Ray also includes a picture-in-picture video commentary, and an interactive Bond trivia game called "Know Your Double-O." Whew! And it's all wrapped up in a much cooler cover than the original release, utilising the film's awesome teaser artwork. Obviously, this one's a no-brainer for Bond fans.
Casino Royale (1967) 40th Anniversary Edition
All that, and it's not even the only Casino Royale DVD coming out this week! We also get the oft-delayed 40th Anniversary Edition (one year too late) of the 1967 spoof version of Casino Royale, starring David Niven, Peter Sellers, Woody Allen and Orson Welles (among many, many others). This release includes a documentary on "The Making of Casino Royale" and the featurettes, “Bond James Bond,” “A 3 Ring Circus,” “More Directors, More Stars,” “The Big Climax,” and “It’s a Wrap!” The long-awaited special edition is produced by Steven Jay Rubin, a name justifiably familiar to Bond fans as the author of The Complete James Bond Movie Encyclopedia and The James Bond Films. Rubin and Cork provide what's sure to be an informative audio commentary. Apparently not included, however, is the 1954 Barry Nelson TV version of Casino Royale, which was part of the last DVD release (albeit in a slightly truncated version). So while the new features make this disc a must, you might want to hold onto your old copy as well. 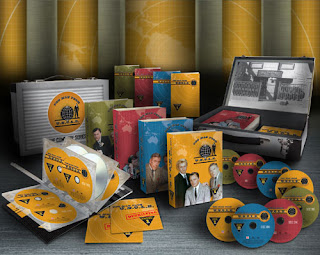 The Man From U.N.C.L.E. - The Complete Series
This is the long-awaited retail edition of the sublime set TimeLife put out last year as an online exclusive. It's still expensive, but not at least you can buy it at a heavy discount now from retailers like Amazon and DeepDicount. And it's worth every penny. This is an amazing set, packed with extras. Discs' and discs' worth of extras, with everything from new interviews with the likes of Robert Vaughn, David McCallum and Richard Donner to U.N.C.L.E.-related clips from Emmy Award shows and the like. Plus, of course, every episode of a fantastic spy series. Prior to getting this set, I'd only ever seen some of the later, campier, color episodes. I was really surprised at the tone of the first, black and white season, which seems more in keeping with Danger Man than with Bond or The Avengers. It's great spy adventure, and generally more on the serious side. The later seasons get bigger and more Bondian (and beyond) with gorgeous Sixties colors and great guest stars. (Vincent Price! Herbert Lom! Terry-Thomas! Nancy Sinatra!) And if you want camp (and I admit, sometimes I do), the third season delivers camp. The series covers the same spectrum as the Bond movies; from its four season run you can choose a From Russia With Love-serious episode like "The Terbuf Affair" or Moonrakerishly over-the-top ones like the notorious "My Friend, The Gorilla Affair." And they're all great in their own way, and they all come bundled in a cool attache case package (though Tim Lucas warns that you must be careful with the handle; it's prone to breaking). This set is a must-own for all spy fans.
The James Bond Collection on Blu-Ray
If you've still got any money left after all that stuff, there's still more Bond releases out today. Six classic Bond titles make their high-definition debut in The James Bond Blu-Ray Collection, Volume 1 and The James Bond Blu-Ray Collection, Volume 2. The titles (Dr. No, From Russia With Love, Thunderball, Live and Let Die, For Your Eyes Only and Die Another Day) are also available individually. Special features are the same as on the previously-released two-disc special edition DVDs, but picture and sound are better than you've ever seen them. In fact, they're pretty much better than you've ever seen any movie from the 1960s!
Individual Two-Disc James Bond Special Editions
Finally, if you never managed to pick up the four sets of two-disc Bond Special Editions in the past two years, you can now buy the two-disc versions individually with slightly better cover art. Previously, only single-disc versions were available on their own.
Posted by Tanner at 10:58 AM