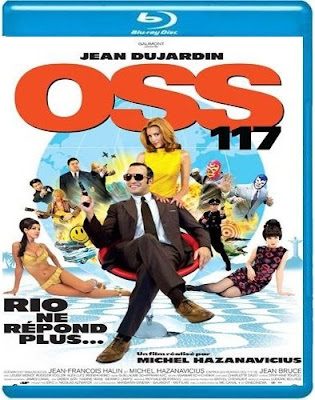 New Spy DVDs Out This Week (And Last)

The biggest spy release of the week by far (first reported here way back in April) isn't in the United States. It's the top-notch spy parody sequel OSS 117: Rio ne répond plus, which is out today in France (PAL, Region 2) on DVD and Blu-Ray, both available from Amazon.fr. Extras include English subtitles, an audio commentary with director Michel Hazanavicius and star Jean Dujardin (in French, naturally), two featurettes ("OSS 117 : cavalcade à Rio," "La province ne répond plus… de rien"), deleted scenes, a gag reel and the trailer. While not quite as funny as its hilarious predecessor, OSS 117: Cairo Nest of Spies, OSS 117: Rio ne répond plus (aka OSS 117: Lost In Rio) is about as perfect a sequel as you could hope for. Jean Dujardin is simply amazing as the cluelessly (almost innocently) chauvinist and racist secret agent who embodies the attitudes of his time even as times are changing all around him. Hazanavicius once again does an impeccable job of recreating the look and filmmaking techniques of the era, this time the late Sixties instead of the late Fifties setting of the first film. While making fun of the attitudes of the era, OSS 117: Rio ne répond plus is at the same time a love letter to the films of the era. It homages everything from On Her Majesty's Secret Service to Our Man Flint to Matt Helm to, of course, the original (serious) OSS 117 films–and even ventures farther afield to include nods to Harper, Hitchcock and Elvis movies. Like the first film, the sequel manages to masterfully combine smart, irreverent satire with slapstick physical comedy with winning results. It is an absolute must-see for fans of Sixties spy movies. As far as I know there is still no U.S. distributor. I have no doubt that it will find one (it took a couple of years for us to get the first movie), but in the meantime the only way to see it so far is on the French disc, which does include English subtitles. Also out this week are double feature configurations including both OSS 117: Cairo Nest Of Spies and OSS 117: Rio ne répond plus on DVD and Blu-Ray.

Also available in Europe this week is Network's standalone release of their interview with star Richard Bradford from their DVD collection of the classic Sixties ITC spy show Man In A Suitcase. In Character: Richard Bradford, which I reported on in more detail last week, is available from Network's website. It is a Region 2 PAL release.

Here in America, we get Get Smart: Season 4 on its own today. It's been available for a while in the feature-laden box set from Time Life, but at the loss of a couple of extras, now you can get it on its own at a budget price. Season 4 is the one where Max and 99 finally tie the knot.
I didn't get to do a DVD post last week, but we got some good spy releases then, too. For starters, Fox brought us Units galore. Season Four of David Mamet's covert operations drama is available on DVD and Blu-Ray with copious special features (commentaries, deleted scenes and featurettes), and the entire, prematurely truncated four season run is all collected in The Unit: The Complete Giftset. 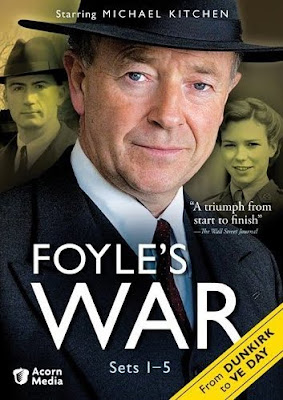 Finally, and perhaps most impressively, Acorn Media unleashed Foyle's War: Sets 1-5: From Dunkirk to VE Day. While I knew that this British wartime mystery series was masterminded by Alex Rider creator Anthony Horowitz, I had never actually realized that it was a spy show! But I suppose the very nature of police work in wartime dictates that DCI Foyle (played sublimely by the screen's best Bill Tanner, Michael Kitchen) routinely encounters foreign agents and saboteurs–and just as routinely crosses paths with (or steps on the toes of) MI-5 and other British spy agencies. This is a remarkable series, where the mysteries play second fiddle to the fabulous characters and the engrossing period setting. And besides Kitchen, you'll spot lots of familiar spy faces throughout the series. The first few episodes alone boast Bond babe Rosamund Pike, Casino Royale's Tanneresque Tobias Menzies and For Your Eyes Only dayplayers Paul Brooke and Charles Dance, the latter of whom of course also played Ian Fleming in the 1989 TV movie Goldeneye: The Secret Life of Ian Fleming. And there's a character named Fleming in the Foyle's War episode he stars in. Knowing Horowitz's admiration for 007, I don't think it's a coincidence. (There's a good interview with Horowitz included among the bonus features where he talks about how he comes up with character names.) I'll have a more in-depth review of Foyle's War soon, but it's well worth checking out for spy fans.
Posted by Tanner at 11:44 AM