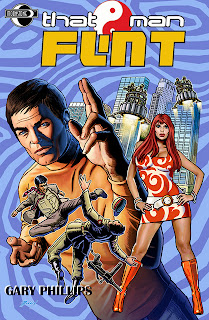 This is cool! Moonstone, the comic book company specializing in licensed characters from a bygone era, has added Derek Flint to a roster that already includes Honey West and The Saint, among many others.  That Man Flint #0, a 16-page color comic book by Gary Phillips and Kevin Jones, will introduce a new generation of comics readers to the superspy and Jack-of-all-trades originated by James Coburn in the movies Our Man Flint and In Like Flint.  ICv2 reports that the cover price on this special preview issue is just $1.99, with a retailer incentive for ordering four copies.  Make sure you ask your local comic shop to order you a copy.  (Hey, while you're at it you should also ask them to order you a copy of my comic, Night and Fog, which finally came out in trade paperback in January. I just realized that I'm pimping someone else's book on my blog more than my own simply because it's not a spy comic, and that ain't right, so I decided to insert this awkward and unrelated plug. You can also order the Night and Fog trade paperback on Amazon. Ahem. Back to the business at hand.) Here's Moonstone's description of That Man Flint:


Mods, mini-skirts and Vietnam. Paisley shirts and satellites. Afros and lasers. The Cold War is hot and the Red Chinese aren’t the only ones doing the brainwashing. Love is in the air, but everyone isn’t groovy.

Derek Flint, inventor, ballet instructor, editor and contributor of <sic> the revised Kama Sutra, transcendentalist and translator of an ancient Mayan cookbook, seeker of the third eye and freelance spy, is the one M.A.C.E. (Mandated Actions for Covert Enforcement) calls on to tackle their most perilous assignments.

From crazed Nazi scientists hatching dastardly plans, sultry Russian spies with killer bodies and kung fu grips, super strength cyborg assassins, to fiendish henchmen and quixotic masterminds, these are examples of adversaries mystery writer Gary Phillips (Operator 5 and Decimator Smith) will throw at the cool, collected Mr. Flint. With his gadgets and skills, aided by his quartet of brainy glamour gals, That Man Flint is a retro revisionist series capturing the fun, feel and excitement of halcyon espionage fare such as The Man from U.N.C.L.E., Bond in Goldfinger, and Steranko’s Nick Fury for today’s audience. 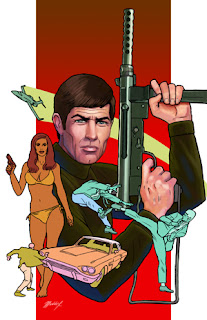 M.A.C.E., huh?  So I guess they were able to secure the rights to the character, but somehow not his original organization, Z.O.W.I.E.?  That's kind of weird.  And did they get the rights to Flint's signature gadget, a cigarette lighter with eighty-two different functions ("Eighty-three if you want to light a cigar!")? I can't help but notice that it's no longer part of this revised Flint logo, and the copy mentions "gadgets" when the original Flint always relied on just this one.
Even without the actor, hopefully this endeavor will channel James Coburn's Flint, because he simply is Derek Flint, as proven when Eurospy star Ray Danton ill-advisedly attempted to pick up the mantle for the TV movie Our Man Flint: Dead On Target. Mark Maddox's cover artwork definitely captures the energy and spirit of the Flint movies (it's a very nice Flint touch that he's kicking a uniformed authority figure in the top image, as the movies always figured out ways for Flint, who was sort of the counterculture's spy hero, to attack people in uniforms) except for one crucial detail: I feel like Derek Flint should be smiling.  James Coburn had a famous smile and always gave the impression that he was having a good time, however bad the situation he was in.  Bob Peak's classic Sixties poster images always captured that, so it's weird for me to see a grim, scowling Flint on these covers. That said, I do love the second image as spy art, despite the character's expression. I'm really looking forward to seeing how this project shapes up!
Posted by Tanner at 11:59 AM

When I discovered that Moonstone was doing Flint, I volunteered to design the logo, and that's it there on the art.

My original version *did* have the cigarette lighter flame, but I was asked to remove it and replace it with the ying/yang symbol.

I'm not sure quite what rights the Moonstone guys have negotiated...

Very intersting! Thanks for the insight, Christopher. It could just be that they didn't want to be seen in any way promoting smoking...

How can I order the series from moonstone?

Moonstone doesn't list in Previews, so I find their products very hard to find in comics shops, unfortunately. But you can order the comic through their website: http://moonstonebooks.com/shop/search.aspx

I don't think any actual series ever materialized. Just issue 0, and a crossover with Honey West.