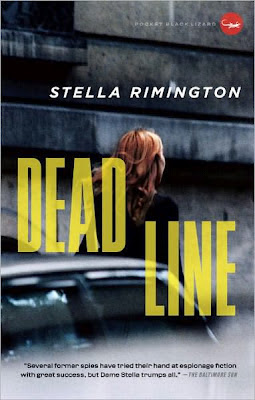 Stella Rimington’s Dead Line, part of a quartet of novels that kicked off Vintage’s Pocket Lizard line (distinguished by their distinctive black page edging) last summer, might very well be my favorite Liz Carlyle book yet. I’ve enjoyed them all so far, but Secret Asset and even the highly enjoyable Illegal Action lacked the oomph of the former MI5 Director General’s debut novel, At Risk. Happily, Dead Line is just as thrillingly page-turning as that one, and offers a wide array of equally memorable characters. In fact, while her previous novels tended to trade off points of view between MI5 agent Carlyle and her usually unidentified antagonist (and occasionally her able assistant Peggy), Dead Line expands its points of view to encompass tons of characters, all making up the same grand tapestry and all coming together as pieces of the puzzle and the plot, forming a huge panorama of the London spy scene. We get inside the head of not only Liz and some of her colleagues, but also agents of the CIA’s London Station (new territory for Rimington, who’s thus far eschewed the Cousins in her novels), Syrian intelligence operatives, Mossad agents, a couple of innocents caught up in the spy game, and of course that nebulous antagonist.

The action begins when an asset in Cypress gives the MI6 station chief there credible intel on a threat to an upcoming Mideast peace conference to be held in Gleneagles, Scotland, which will be attended by the Prime Minister, the American President and the leaders of Israel and Syria, among other distinguished dignitaries. The asset hasn’t got much information, however—just the names of two British citizens somehow connected with the coming attack. He doesn’t even know how they’re connected. That’s up to Liz to suss out—once the intel has finally made its way from MI6 to MI5 in a manner not quite as timely as taxpayers would probably hope for, but probably sadly accurate given Rimington’s career experience. It’s fascinating to track the disbursal of this intelligence to other parties. Rimington demonstrates well what a valuable commodity good intel is in the intelligence community, and how jealously guarded it is by those who possess it. MI6’s Geoffrey Fane, a character familiar to regular readers of this series who shares a shaky professional history with Liz, is the man who controls it. He then doles it out in small doses to his colleagues in MI5 (since it pertains to a domestic threat, which falls under their purview), the CIA (since the threat also concerns the American President), Whitehall, and eventually the Mossad. Fane doesn’t give any of his supposed allies quite the whole picture, withholding different bits from different parties—partly to protect his sensitive source, and partly to ensure that his own agency remains in control of this information for political reasons. Naturally, had all the parties had total access to the details all along and cooperated, it would have taken them a lot less time than it does to piece together exactly what’s going on. Regrettably, I suspect this lack of full cooperation or trust between various agencies on the same side still goes on in both Britain and America, even more than ten years after 9/11 and the ensuing overhauls of the Intelligence Community. But while the real-life scenarios are frightening, this sort of inter-agency politics makes for wonderful reading!

Rimington demonstrates not only her intimate knowledge of the spy profession, but also her knowledge of spy literature with some nice nods to le Carré, Graham Greene and others. I particularly appreciated the Greene reference. Anyone who’s read or seen the movie of Our Man in Havana will have a good guess as to the true value of the intelligence received by Syrian agent Ben Ahmad from an asset at secret rendezvous in a vacuum cleaner shop!


Dead Line moves along at a brisk pace not because it’s wall-to-wall action (although Liz is the victim of a harrowing assassination attempt this time around), but because of the characters themselves and their relationships with each other. The solution to the mystery depends not only on Liz assembling clues in the right order, but also on her cracking the code of how to deal with each of her colleagues in such a way as to get all the information she needs out of them. That’s a slow and tedious process, but it doesn’t read that way. All of the characters are interesting and well-rounded. As in the other books, we’re treated to glimpses into Liz’s personal life as well as her professional one. A subplot in Dead Line, for instance, involves her apprehension about and eventual acceptance of the new man in her widowed mother’s life. All of Rimington’s spies are human beings as well as secret agents, attempting to balance their social and professional lives in the same way as anyone else with a demanding job.

Perhaps because of her persistence in portraying realistic intelligence operations as opposed to Bondian world-in-peril plots, Rimington’s books tend to fizzle out a bit in their denouements rather than explode. That’s true again to some extent in Dead Line (though less so than in the preceding two books), and probably keeps it from reaching the heights of At Risk. But even if we guess the enemy’s plot before Liz does, it’s still a satisfying finale and an even more satisfying journey to get there.

For the third time in four books, Dead Line once again features a rogue intelligence agent turning against his or her service and aligning him/herself with terrorists. Whereas previously I’d groaned a little bit at that 24/Spooks-ish device, this time it actually solidifies itself as an intentional theme in Rimington’s writing, and not an accidental cliché. Liz herself summarizes this theme when she wonders, “Who said the Age of the Individual was over?”

“What I always find surprising,” muses another character, “is that with all our sophisticated technology and the big bureaucracies we work in, a single person can still do so much damage.”

Liz ponders this and replies, “Well, when you think about it, so much of our work is about the actions of individuals—not governments or bureaucracies. That’s what makes it so fascinating. If it were just about process or gizmos, do you think you’d want to be doing the job?”

“Absolutely not,” concludes her colleague emphatically. “And neither would you.” And neither would readers. Ultimately, it isn't the process or the gizmos that keeps fans returning to the genre time and again. It's the characters. The individuals. And with a keen insight honed by years spent observing and analyzing such individuals and their behavior for a living, Rimington always manages worthy contributions on this front to the spy fiction genre.

Dead Line is as exciting and satisfying a contemporary spy novel as I’ve read this year. While readers of the whole series will be rewarded with developments in long-term personal relationships and character growth from book to book, there’s no reason why a first-time reader couldn’t plunge into the world of Liz Carlyle with this book. In fact, I’d recommend it. If you’ve never given Rimington a try but enjoy the less spectacular, more realistic side of spy fiction and find well-written political in-fighting as exciting as car chases and gunfights (as I do), you’ll find a lot to enjoy in Dead Line. And it doesn’t hurt that the American paperback edition comes wrapped up in a particularly satisfying physical package, either! I’m a big fan of the Vintage Pocket line on a judging-a-book-by-its-cover level alone. These books are a good size (smaller than your average trade paperback, but larger than a mass market one), a good texture (yes, that matters to me) and very attractive thanks to that black page edging. I hope all of Rimington’s novels end up reissued in this line.
Posted by Tanner at 8:33 PM

I've enjoyed (to varying degrees) all of 'Rimington's' novels.

And while I'm sure she lends her professional expertise to them, I just do not think she actually WRITES them.