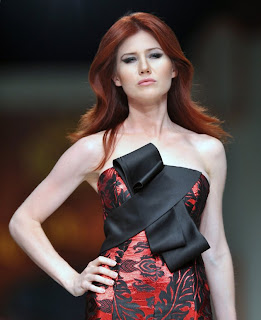 While history's most successful spies usually go unsung (their success in no small measure due to maintaining a low profile, and in the best cases never being exposed), the failures tend to enjoy a certain notoriety or popularity long after their deaths thanks to scholarly books and analogues in fiction. One of the most famous unsuccessful spies in recent memory, however, is trailblazing a new kind of notoriety in her own lifetime. Anna Chapman, the would-be Russian sleeper agent whose whole network was rolled up by the FBI in 2010 and shortly thereafter traded back to Russia, has since enjoyed celebrity status in her home country and around the world, appearing in Russian editions of Maxim and Playboy. Now the AP (via Yahoo!) reports that the photogenic spook is making a splash on the catwalk as a model. What makes that story of interest to readers of this blog is how she's been decked out and accessorized to live up to the image of the sexy Russian spy as portrayed in film and fiction over the years. Posing in elegant gowns and less elegant tight leather with accessories including a gun and two male "handlers," Chapman is indeed the spitting image of the femme fatale!
Posted by Tanner at 12:59 AM